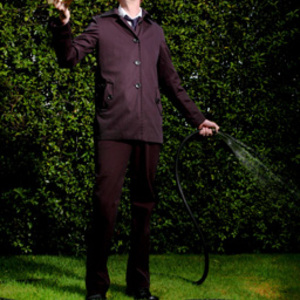 Her Space Holiday is Marc Bianchi, a musician with roots in the California emo scene. During the early 90's, he was part of the highly influential emo band Indian Summer. Marc began recording under the moniker Her Space Holiday in 1996. It started as a simple affair: just a four track, a couple of cheap microphones, a beat up drum set, a guitar, and the desire to make music on his own. The band released the album Young Machines in 2003. His most recent album is 'XOXO, Panda & The New Kid Revival.'

Initially, Bianchi was not interested in releasing Her Space Holiday's first works, as he was focused on launching the bands associated with his new (now defunct) record label Audio Information Phenomena. However, after being approached by Chocolate River Industries to record a 12" EP, Her Space Holiday became Bianchi's full time project.

It has been a slow build from the get go. Until the release of 2003's "The Young Machines" (Mush/Wichita, V2/And Records) which reached #2 on CMJ's top 200, garnered critical success in the music industry, even the 2004 Polish idol winner Monika Brodka covered HSH's "My Girlriend's Boyfriend" earning her the Polish equivalent to a grammy for "debut single of the year". All of this has greatly expanded the HSH profile. So what now?

There has been a lot of changes both personally and professionally for Marc. After living in Austin, Texas for nearly three years, he decided to move back to California. He packed his bags and settled in to a little house in the middle of nowhere in Northern California. And began recording tracks for his latest effort "The Past Presents The Future". In extreme isolation and creative re-evaluation, the content of the Her Space Holiday sound and meaning became much broader than on his previous works. Though some of the "staple" Her Space Holiday elements remain present, (minimal guitars, string arrangements, and simple beats) the lyrics have morphed from short sided, one person perspectives, into short stories starring characters and imagery that we all can find in our daily lives. In the end, leaving the listener feeling like they have experienced a collection of parables rather than a stack of confessions. Desperation has been replaced by hope, and denial with responsibility. The songs on the past presents the future are not any less personal then those on the previous Her Space Holiday albums. But the difference this time around, is rather then feeling like you are looking into the life of one songwriter, you walk away with a sense of getting a deeper glimpse into the world around you.

Ever conscious of the visual representation of Her Space Holiday, Marc has teamed up once again with long time friend, and The Young Machines designer Hanni El Khatib. Whose design credits include (contributions to neomu: by Deanne Cheuk, Faesthetic, Freedom Book, T-Shirt designs for Huf, Influx Magazine, Amnesty International, Nike, Tom Clancy, EA Games, as well as running his own T-shirt design label called 06.08).

While awaiting the release of The Past Presents The Future, Marc has also been hard at work doing remixes for Bright Eyes, Boom Bip, Kid 606, American Analog Set, and Idiot Pilot. With many more to come before the end of this year.

There are so many projects on the table for Her Space Holiday and Marc Bianchi right now, that sleep doesn't really seem to be an option. Besides the upcoming 6 month world tour that is in the works to promote "The Past Presents The Future", and a pile of remix offers, Marc and long time friend/collaborator Hanni El Khatib will also be launching a new record label and production team under the title "Money Fight". The label philosophy behind Money Fight is rather unique. To not make money. Only releasing white label 12"'s that feature musical collaborations between Her Space Holiday and Street Price (Hanni's project). The records will not be available in stores, they will be handed out strictly to DJ's in major markets, as well as sold at Her Space Holiday/Street Price shows for wholesale. It's making music for the sake of people hearing it. Pure and simple. The production side of Money Fight will consist of hanni and marc lending their vastly different musical styles to other artists in the form of remixes and album production. The two of them will also be collaborating on a design/short story book that is slated for release in the summer of 06.

So in a sense, the release of "The Past Presents The Future" signifies more than just a new album for Her Space Holiday. Its a jump off for the next chapter. A bench mark for the acknowledgment of what once was, and what will soon be.

From the bedroom to the boardroom.

The Past Presents the Future

Home Is Where You Hang Yourself