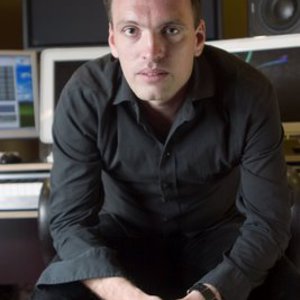 Henry Pryce Jackman studied classical music in the UK at St. Paul's Cathedral Choir School, Eton College and Oxford University. Obsessed by technology and contemporary culture, his formal musical education was mixed with the beats and bleeps of modern electronica. Henry has enjoyed a successful and eclectic career in music that ranges from the chart topping to the esoteric, and combines a varied palette of skills from string orchestration to beat programming, sampling and sound design, production and mixing.

Henry has enjoyed a successful and eclectic career in music that ranges from the chart topping to the esoteric, and combines a varied palette of skills from string orchestration to beat programming, sampling and sound design, production and mixing. After 8 years of collaboration with other artists and their music, Henry is now focusing on his own material and scoring music for movies.

Utopia, published by West One Music, is a combination of Latvian choirs, innovative Electronica and cutting edge production. Transfiguration, published by KPM Music, was written, programmed, arranged, engineered, mixed and produced by Henry and completed in 2005. Transfiguration combines classical textures and melodies with 21st century production techniques and Henry's own lyrics. Acoustica, also published by KPM Music, has just been completed in collaboration with the award-winning guitarist and songwriter, Augustus Isadore.

Prior to working on Utopia, Transfiguration and Acoustica, Henry's work within the music industry has been varied and high profile. His programming credits include Mike Oldfield, Marc Almond, Coolio, and Kirsty McColl. He collaborated with Andy Gardner (of Plump DJ's fame) to produce a series of Dance Remixes that topped the dance charts and were selected for Pete Tong's Essential Selection (Radio 1), for artists like Kele le Roc and Boyzone. At the same time he worked with Michael Gordon, a New York-based minimalist string composer, on his composition - Weather- for Coalition Records.

Not long afterwards, Henry was working with the legendary Trevor Horn, programming and executing string arrangements for the title track of 20th Cent Fox's film Anastasia, featuring Richard Marx and Donna Lewis on the song In the Beginning. He also co-produced Born On A Sunday with Trevor Horn on the Art of Noise album The Seduction of Claude Debussy. Meanwhile, he quietly produced some unashamed pop with the likes of Gary Barlow from Take That (which reached no.3 in the UK charts) and Justin.

Collaboration with internationally acclaimed Seal was shortly to follow as they worked together to write and produce This Could Be Heaven for the motion picture The Family Man, which starred Nicholas Cage. As well as production work, Henry continues to write his own music - which is used on CNN News, the BBC, The Oprah Winfrey Show and The Discovery Channel.

Henry is currently making great strides into the film world. As of January 2006, he has completed 4 movies with the world-renowned composer - Hans Zimmer ? contributing as an additional composer and performer:

The Falcon And The Winter Soldier Vol. 2 (Episodes 4-6)

The Falcon And The Winter Soldier Vol. 1 (Episodes 1-3)

Jumanji: The Next Level