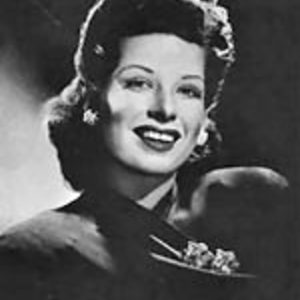 Helen Forrest (April 12, 1917?July 11, 1999) was one of the most popular female jazz vocalists during America's Big Band era. She was born Helen Fogel to a Jewish family in Atlantic City, New Jersey on April 12, 1917. She first sang with her brother's band at the age of 10, and later began her career singing on CBS radio under the name Bonnie Blue. Forrest achieved fame when bandleader Artie Shaw hired her in 1939.

Forrest achieved fame when bandleader Artie Shaw hired her in 1939. Shaw was looking for new talent since vocalist Billie Holiday had left the band the previous year. Forrest recorded 38 singles with Shaw's band. Two of her biggest hits with Shaw were the songs "They Say" and "All the Things You Are."

In late 1939 Forrest left Shaw and joined Benny Goodman, with whom she recorded a number of celebrated songs, including the hit song "The Man I Love." She recorded with Nat King Cole and Lionel Hampton in 1940. In 1941, Forrest was hired by Harry James. It was with the Harry James Orchestra that she recorded what are arguably her most popular numbers, including "I Had the Craziest Dream" and "I Don't Want to Walk Without You." Forrest also dated James until he met the woman he would later marry, Betty Grable.

Because of her involvement with most of the popular bands of the big band era, Forrest was known as "the voice of the name bands."

Forrest left Harry James in late 1943 in pursuit of a solo career. In the late 1940s she sang on Dick Haymes' radio show. It was with Haymes that she recorded the song "Some Sunday Morning." After a dip in recording in the 1950s, Forrest sang with Tommy Dorsey's Orchestra led by Sam Donahue in the early 1960s. She continued to sing in supper clubs in the 1970s and 1980s. Her final album was released in 1983.

She kept singing until the early 1990s, when arthritis forced her into retirement. Over the course of her career, she recorded more than 500 songs. Forrest also acted in several musical films including Bathing Beauty (1944) and Two Girls and a Sailor (1944). She was a civil rights activist as well.

Forrest married and divorced three times, and had one son, Michael Forrest Feinman, who currently resides in Lancaster, California.

Helen Forrest died from congestive heart failure on July 11, 1999 in Woodland Hills, California at the age of 82. Her final resting place is in Mount Sinai Memorial Park in Los Angeles, California.

Sweeter As The Years Go By