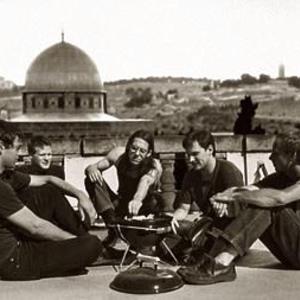 The band then released two self-financed EPs in 2000 and 2001. Paul Spitz left the US to travel in Turkey and Zak Riles joined as guitarist, often playing more of an acoustic role. In 2002 Hall sent a promotion CD to Neurot Recordings who were convinced of the band's potential.

In 2003,just before the release of their first full-length album, the band changed its name to Grails. They adopted a louder, more aggressive style, often switching instruments with each member writing songs that saw them branching out to increasingly disparate styles.

By the time the Black Tar Prophecies series was released Timothy Horner left and the band carried on with only 4 players. The group often picks up an extra musician for tours, allowing Amos to switch between guitar and drums and expanding the live instrumentation. Recently, Randall Dunn and Dave Abramson have joined the group live.

In their early years, Grails only toured Europe but have switched to focusing on the East Coast of the United States in the last few years. Despite living in Portland, the band rarely plays live shows in their hometown.

The various members stay busy with several different projects. Hall has played guitar with Steve Von Till of Neurosis in Von Till's project Harvestman , Amos has played drums with Jandek, produced for Yellow Swans and releases solo records under the name 'Holy Sons', and Riles has toured as 2nd guitarist for M. Ward.

In 2007 Grails released Burning off Impurities with Temporary Residence.

In March 2008 it was announced that Emil Amos joined OM and a new Grails record called Take Refuge in Clean Living was released May 13 on Important Records. Their latest full-length album, Doomsdayer's Holiday was released on October 7, 2008, on Temporary Residence Limited. The album was met with critical acclaim, and the band were featured on the cover of UK magazine Rock-A-Rolla.

A comprehensive DVD was released on April 7,'09 called "Acid Rain" summing up their most productive period. In 2010, the band has re-issued three releases, including versions of their first two albums remastered by Carl Saff, as well as a vinyl issue of Black Tar Prophecies Vols. 1, 2, & 3 on Important Records. Also released on Important as a vinyl-only EP was Black Tar Prophecies Vol. 4.

Their next planned release is another full-length album called Deep Politics, being released by Temporary Residence Limited on March 8, 2011.

The Burden Of Hope