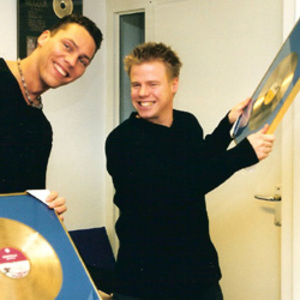 In 1999, successful Dutch artists Ferry Corsten and Ti&euml;sto joined forces to create the trance partnership of Gouryella. To highlight their importance in the trance scene at the time, there were 20 separate CD releases of the 4 Gouryella tracks from 9 different labels. Incidentally, the name of Gouryella comes from the Aborigine word for Heaven. Gouryella is known to have released six tracks: Gouryella, Gorella, Walhalla, In Walhalla, Tenshi and Ligaya.

Incidentally, the name of Gouryella comes from the Aborigine word for Heaven.

Gouryella is known to have released six tracks: Gouryella, Gorella, Walhalla, In Walhalla, Tenshi and Ligaya. Please note that Gorella and In Walhalla were B-Sides and were never released in the UK, although they can be found on the respective German and Dutch import CDs.

Late in 2000, Tiesto decided he needed to concentrate on his solo work and left Ferry Corsten to write and produce Ligaya on his own in 2001.

First single, Gouryella, was released to enormous praise and contained remixes from DJ Gigilo and Armin van Buuren. Walhalla, also released in 1999, also featured a remix from van Buuren, as well as Hybrid.

The release of Tenshi in 2000 saw a slightly different style in Gouryella's work and some fans say that the apparent move away from euphoric synth lines and towards an edgier electronic sound represented Tiesto's increasing influence. However, a stunning remix from Transa made sure it became a club classic.

Gouryella remixed two tracks for other artists, both in 1999: Solange - Messages and Binary Finary - 1999.

Additionally, Corsten and Tiesto released two tracks under the name of Vimana. We Came was released as a single in 1999 and featured a B-Side called Dreamtime. At the time, neither of these tracks were deemed suitable for a release under the Gouryella name (whose style was for hardcore euphoric tracks), so a further alias was created.

There are currently no plans for another Gouryella release, and even if there is at some point, it is almost certain that Ti?sto will not be involved.