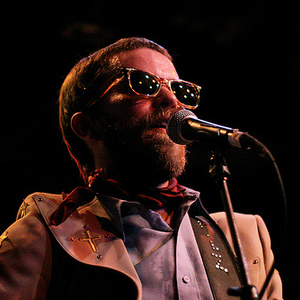 "Galactic-Forest Rock" is the term used by Golden Bear to describe their sound. The band ties together themes of triumph, hope and excitement, along with rocking anthemic riffs and bombastic beats to create a melodious roar. This roar, combined with Golden Bear's reputation for over-the-top and unpredictable live performances (see SPIN.com) has won the group the affection of many music lovers in its Austin, Texas hometown and beyond.

Following its inception in 2003, Golden Bear determinedly and steadily worked their way into the bulging Austin music scene and built a loyal and devoted fan base before releasing its debut LP in August 2006. The self-titled album won praise from national publications such as Magnet, Entertainment Weekly, Spin, and The Onion, as well as from DIY bloggers and prominent internet sites such as Pitchfork and Tiny Mix Tapes. Additionally, the record spent three weeks on the CMJ top 200 college radio chart.

Mere months later, the group began work on To the Farthest Star, a collection of eleven songs that deal with the themes of good, evil, hope, and dread, all set within the vast emptiness of a cold, dark outer-space. This album pushes their "Galactic-Forest Rock" sound to places even Golden Bear didn't expect. To the Farthest Star is the sound of a band poised and ready to move out of its much-beloved but limiting hometown scene, and assert itself on a national level.

To The Farthest Star