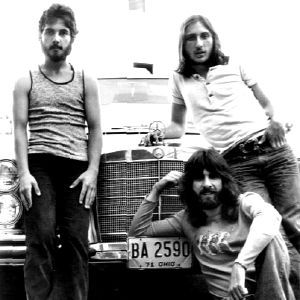 In the late '60s and early '70s a power rock trio from Youngstown, Ohio called Glass Harp reached for the stars. A bare bones group in the tradition of Cream, The Jimi Hendrix Experience, and The James Gang, Glass Harp developed a signature progressive sound that allowed the members, collectively and individually, to stretch beyond the confines of standard form; breaks in songs for guitar, bass, flute, and drum solos were de riguere, as extended improvisations that would take the band's performances into the late hours. They were pioneers in the jam-band movement.

The trio's fans were amazed by the lightning style, precise technique highly lyrical solos of the band's 18 year old guitarist Phil Keaggy, who had the use of only nine fingers. Combined with the tasteful, rhythmic bass lines of Daniel Pecchio and the sharp, assertive drumming of John Sferra, Glass Harp created a wall of sound that thrilled sell-out crowds across the upper Midwest and beyond. They garnered a large and loyal regional following. National notoriety followed when they toured with Traffic, Yes, The Kinks, Humble Pie, Alice Cooper, Ted Nugent, and Grand Funk Railroad. Through the efforts of manager Chip Killinger, they connected with Lewis Merenstein, and with him, even greater national attention came with the release of the band's three critically- acclaimed Decca(MCA) LPs: Glass Harp, Synergy, and It Makes Me Glad. The band's highly energetic and wildly improvisational live concerts fueled the band's legend. Concert goers from the Fillmore West to Carnegie Hall turned into instant fans.

The band dissolved on the cusp of achieving mainstream rock stardom when Phil Keaggy left to become a pioneer in Christian music. It's within this scene that Phil found a home releasing 50 solo recordings, performing live throughout the world. With his Christian music recordings Phil has earned 5 Dove awards, 2 Grammy nominations, 2 Nashville Music Awards, and he has finished #2 and #3 twice each in the annual Guitar Player Magazine poll.

In 1997 the band acquired and released the ?Live at Carnegie Hall? recording that was made in 1972. Glass Harp reunited in 2000 for a show at The Rock and Roll Hall of Fame. In 2000 they recorded the "Live with The Youngstown Symphony Orchestra" CD in their hometown. The concert was recorded and independently released in 2001 on the ?Strings Attached? CD. Response to the CD was great and created more opportunities to play live. In 2002 they began work on their first studio project in 30 years. They recorded 16 songs at Blue Desert Recording on "The Row" in Nashville and in Phil's home studio. The 2003 CD Hourglass was mixed in Ohio and mastered in Nashville with Richard Dodd.They released the "Hourglass" studio CD in 2003, and the triple-live album "Stark Raving Jams" in 2004. They toured in 2003 and 2004. Glass Harp has rekindled interest amongst longtime fans while finding an entire new generation of listeners through the internet and live concerts.

It Makes Me Glad (Remastered)