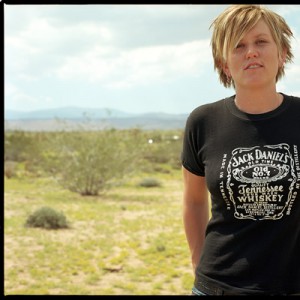 Garrison Starr is a singer-songwriter who originally hails from Hernando, Mississippi; a suburb of Memphis, TN. She was born on April 29, 1975. Her first album "Pinwheels" was recorded shortly after her high school graduation. During a 1 1/2 year stint as a student at Ole Miss, Starr met and forged a friendship with fellow artist and producer Neilson Hubbard. To this day, Starr and Hubbard frequently collaborate. Her second release, the 7 track EP "Stupid Girl" references her experiences there which were not always pleasant.

Her first album "Pinwheels" was recorded shortly after her high school graduation. During a 1 1/2 year stint as a student at Ole Miss, Starr met and forged a friendship with fellow artist and producer Neilson Hubbard. To this day, Starr and Hubbard frequently collaborate. Her second release, the 7 track EP "Stupid Girl" references her experiences there which were not always pleasant.

Garrison was signed to Geffen Records who released her first major label album "18 Over Me" in 1997. "18 Over Me" includes the song "Superhero" which is her most well known song to date, it has appeared on several compilations including "Live at World Cafe" and CMJ magazine's sampler. Garrison re-recorded "Superhero" for her 3rd major release 2005's "Airstreams & Satellites". It also includes a faster version of "Molly" which originally appeared on the "Stupid Girl" EP. On both versions producer Neilson Hubbard sings back-up vocals. "18 Over Me" is currently out of print and can only be purchased used. Garrison occasionally has copies at her live performances, but currently Geffen owns the rights to it so she cannot re-release it.

On the moderate success of "18 Over Me" Garrison was invited to play on the highly successful all female festival tour Lilith Fair created by Sarah McLachlan. Starr left the deep south for Los Angeles in the mid 1990s. There was a huge gap between the release of "18 Over Me" (1997) and "Songs From Take-Off To Landing" (2004) because Garrison (along with many other artists) was dropped from the Geffen roster. Garrison recorded several demos of songs that would eventually become part of "Take-Off" those were never officially released and in the years between those recordings & the release of "Take-Off" the songs evolved and changed significantly. Between these releases Garrison released "24/7" an EP of live & acoustic versions of songs from "18 Over Me" as well as a cover of the Rolling Stone's "Taxman" and a previously unreleased song "Simple Theme". Also during this time Garrison released "Something To Hold You Over" for devoted fans who were asking for new recordings.

In Los Angeles she gained inspiration for two albums, "Songs From Take-Off To Landing" (which was finally released in February 2004) and "Airstreams and Satellites" (October 2005). "Airstreams" includes a hidden track in which Garrison makes her first definitive reference to being a lesbian. She has toured with the likes of Melissa Etheridge, Steve Earle, Melissa Ferrick and Mary Chapin-Carpenter.

In 2005, Starr returned to the south, more specifically, Nashville, Tenn., where she completed her most recent album, "The Sound of You and Me" (March 2006). Released by Vanguard Records it includes a fellow Vanguard artist Mindy Smith on background vocals for track "Kansas City, KS".

Starr's song "Superhero" was featured during ABC-TVs coverage of the Women's World Cup Soccer in 1999. More recently, Starr's "Beautiful in Los Angeles" was the featured song on the season one finale of MTVs original program "The Hills" (2006).

Starr is currently working on her next album, a greatest hits cd for which she asked fans to vote for their top 10 favorite songs. In early 2007 she released a statement that she is recording the songs that received the most votes and that the cd will be available at her Los Angeles shows in late January 2007. Garrison put that cd online for purchase on her official website www.garrisonstarr.com in March 2007.

Garrison's new album "The Girl That Killed September" will be released on October 18, 2007 on Media Creature. Available Online for $10 (CD) and $7.50 (DOWNLOAD) LISTEN | WATCH EPK http://www.mediacreature.com/playerpage/gstarr/blastplyr-lcns.html

Girl I Used To Be

The Girl That Killed September

Sound Of You & Me

Songs From Take-Off To Landing