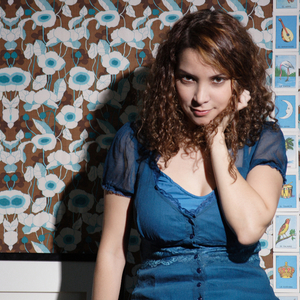 Gaby Moreno's new album, Illustrated Songs, continues her love affair with the sounds of the blues, soul and jazz that captivated her as a girl. Although she was born and raised in Guatemala, it was the sounds of the American South that inspired her to become a songwriter and recording artist. ?I heard an African American woman singing on the street in New York City when I was younger. I just froze. When I asked her what she called that music, she looked at me and said, ?That's the blues, honey.'?

As Moreno devoured albums by Robert Johnson, Louis Armstrong, Nina Simone and Ella Fitzgerald, she discovered an affinity for the vintage African American sounds of the 20s, 30s and 40s. She combined them with the sound of the Latin music she loved from the same era to create the 12 tunes on Illustrated Songs. Her affection for old fashion music is even reflected in the record's title.

?The illustrated song is a type of visual art from the vaudeville era of the 20s,? Moreno explains. ?You could consider it an early kind of video. They'd project still images from glass slides on a screen and have live musicians playing to accompany the pictures. Since this album was inspired by the music of the 20s and 30s, the title went well with the mood of the record. Every song is in its own little world.?

Illustrated Songs includes tunes in Spanish and English. Moreno's supple vocals are both soulful and elegant, casting an inviting spell that's midway between innocence and experience. The album opens with ?Intento,? a meditation on love's uncertainty set to a laid back, vaguely Latin pop rhythm. Patrick Warren's serene piano compliments Moreno's wistful vocal. ?I found a poem in a journal I wrote when I was 17,? Moreno says. ?It fit a melody I had that I couldn't find any words for. I don't usually work that way, but it was a perfect fit.?

?Ave que Emigra,? was inspired partly by Gaby's own experience migrating to the USA as well as the Arizona's anti-immigration stance. Its Latinized Bo Biddley beat supports a rocking, mostly acoustic performance, marked by tasty mandolin fills, Lowe's syncopated bass line and Moreno's playful vibrato. ?Mean Old Circus? has an ominous feel, intensified by a dark arrangement that veers from a verse using calliope/oran, sinister accordions and Celeste to a sprightly ragtime chorus. Moreno gets in touch with her inner Aretha on ?Sing Me Life,? one of the album's most soulful tracks. The arrangement tips its hat to the ?60s sound of Stax/Volt with Golding's big Hammond B3, Greg Leisz's tough distorted guitar and Moreno's strong, dynamic vocal.

Bob Mintzer's baritone clarinet sets the melancholy tone for ?Garrick,? a tune based on ?Reir Llorando (Laughing Crying),? a poem by Juan De Dios Peza, that Moreno loved as a girl. ?Everybody says go see Garrick if you're depressed. He's a comedian with an otherworldly aura and he'll cure you. In the last verse, a doctor tells a man that if reading a good book, or loving a woman, can't light his spirits, he should go see Garrick. The patient says, ?I am Garrick. Change my prescription.' This is my version of the story.? The jazzy big band arrangement brings to mind the hits of Cab Calloway, with Moreno crooning the cheerless lyric with an insouciant nonchalance.

Other stand out tracks include ?No Regrets,? a bossa nova sung in Spanish and English, driven by the acoustic bass of David Piltch and Moreno's mischievous vocal; ?Fin? a tropical groove that blends a 50s country waltz with Hawaiian lap steel, mariachi guitars and a sassy vocal from Moreno, Y Tu Sombra? a ballad accented by Aymanns' subtle percussion accents and the smoky cabaret number ?Daydream By Design,? a bright and breezy performance that shows off Moreno's excellent phrasing and Golding's sprightly piano work.

The inventive orchestrations of Illustrated Songs highlight Moreno's remarkable growth as a singer and songwriter. ?I wanted to push myself this time and explore all the colors I hear in the music. Edith Piaf, The Boswell Sisters, classic boleros and Trio Los Panchos got into my brain and transported me to another era. I tapped into that when I was composing these songs?

Gaby Moreno was born in Guatemala City, Guatemala. Her family wasn't particularly musical, but Moreno was singing before she could talk. ?When I was 2 years old, my mom would take me to parties,? Moreno recalls. ?I'd get up on a table and say, ?Ladies and gentleman, Gaby Moreno will now sing for you!' I was not shy at all. When I was five, I was singing along to a classical piece and she heard I had perfect pitch. She took me to voice lessons; I never stopped.

Moreno continued performing at festivals, mostly Disney and Broadway tunes. She also listened to Latin pop music on the radio until a fateful trip to New York City. ?I like musicals, so my parents took me to see Les Miserables. After I heard an African-American woman singing on the street, I went to the nearest record store, saw they had a blues aisle and bought a bunch of CDs: The first song I put on back home was Koko Taylor's ?Wang Dang Doodle.'

The blues overtook Moreno's life. She studied hard and discovered early jazz, torch songs, soul, R&B and artists like The Boswell Sisters and Sister Rosetta Tharpe, as well as the classic Mexican sounds of Trio Los Panchos. ?I learned English from blues records. I'd read the lyrics, then go to my dictionary. In school, we had basic English, but the records made me interested in learning it and singing it.?

The sax was the first instrument that spoke to Moreno, but when her mother bought her a guitar, she was captivated. ?As soon as I knew a couple of chords, I started writing songs. I wanted to play the blues.


As soon as she was out of high school, Moreno came to the U.S. and enrolled at the Musician's Institute in Los Angeles. ?I met my drummer Sebastian as well as my bass player Leslie there. Living in Los Angeles, surrounded by different musician friends, I discovered the classic rock of the Kinks, Zombies and Harry Nilsson.?

In 2006, she won the John Lennon Songwriting Contest with her song ?Escondidos,? first in the Latin category, then overall. That success gave her the confidence to produce her debut album, Still The Unknown. The album was played on KCRW and NPR, getting excellent reviews praising its sparse, elegant sound and Moreno's quietly soulful vocals. The record's success led to opening slots on tours with Tracy Chapman and Ani DiFranco. In 2010, an instrumental piece Moreno wrote with musician friend Vincent Jones was selected as the theme for the new NBC show Parks and Recreation. The theme earned an Emmy Nomination. Moreno's tunes were also used on E!'s Kourtney and Khloe Take Miami, Lincoln Heights and Ghost Whisperer on ABC and MTV's The Hills.

In the summer of 2010, Moreno played the Roskilde Festival in Denmark with singer/composer Van Dyke Parks, performing traditional Latin American songs mixed with Calypso and Americana music. Parks and Moreno are planning a recorded collaboration of standards, but in the meantime Moreno will stay busy touring Europe, Latin America and the US to support Illustrated Songs.