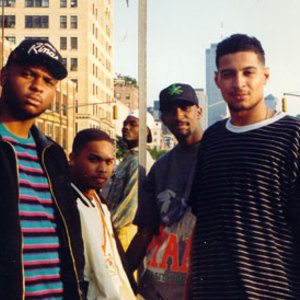 Freestyle Fellowship is a rap group from Los Angeles consisting of rappers Aceyalone, Myka 9, P.E.A.C.E., Self Jupiter and producer J Sumbi. Their vocal techniques focusing on the method of the freestyle, as well as a successful infusion of hip hop and jazz established the group as forerunners in the sub-genre of jazz rap, also placing them amongst prominent West coast underground rap acts of the early 1990s like Hieroglyphics, Abstract Rude & Tribe Unique, and The Pharcyde.

Officially forming in 1991 and releasing the underground track To Whom It May Concern, the Fellowship became known in tape-trading circles, identified by their range in rhyming, at times bordering on scat, and Afrocentric messages over jazz inspired beat production. Their 1993 release, Innercity Griots is acknowledged by many to be among the most influential albums in the history of real hip hop.[citation needed]Aceyalone, the most prolific artist of the group in terms of solo album releases, is known for such works as All Balls Don't Bounce and Love and Hate, a cooperative album with producer RJD2. Mikah 9, P.E.A.C.E. and Self Jupiter also had solo releases, affirming the group's position as showcase for the varied and individual talents of the individual MC. Each member continues a part time commitment to the original group, most recently making a 2005 appearance on a compilation for Los Angeles based label Project Blowed, with the track "Outro".

To Whom It May Concern...