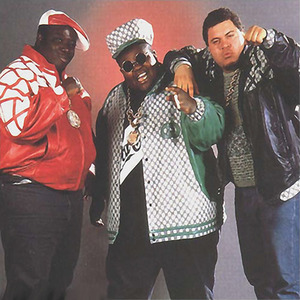 Originally the group was known as The Disco Three. However, the name was changed after their manager, Charles Stettler, complained about how much the trio ate during an early European tour. Charles Stettler and Art Kass were listed as the executive record producers on the 1984 Fat Boys album. Unlike many of the streetwise images of the genre, the Fat Boys were known for their offbeat and friendly style.

Unlike many of the streetwise images of the genre, the Fat Boys were known for their offbeat and friendly style. Much of their material involved the pleasures of food and drink, as well as partying and sexual escapades. Buffy, the Human Beatbox, was a pioneer in beatboxing (using his mouth to portray the typical hip hop percussion "scratch 'n mix" sounds). His distinctive talent was influential to the genre as well as a noticeable hook to get the Fat Boys noticed. Buffy and another contemporary Doug E. Fresh popularized beatboxing, inspiring other artists to innovate, including Biz Markie and later, others such as Rahzel. Attempting to capitalize on the appearance-oriented name of the Fat Boys, another hip hop group dubbed themselves the Skinny Boys, and yet another, the Fat Girls. Their popularity was mild in comparison, however.

For their 1987 album, Crushin', the Fat Boys made a cover version of The Surfaris' hit, "Wipe Out", with The Beach Boys singing back-up vocals. The single made it to #12 on the Billboard chart, and #10 on the corresponding R&B listing. The Fat Boys also recorded a version of "The Twist" with the original recording artist, Chubby Checker.

Capitalizing on their good humored personalities, the trio starred in the 1985 Run DMC film Krush Groove and in the Hollywood feature film, Disorderlies (1987), which also featured Ralph Bellamy as a millionaire invalid who receives bumbling care by his good-natured orderlies (played by the Fat Boys). They were later approached to record the theme song for A Nightmare of Elm Street 4: The Dream Master (1988), called "Ready for Freddy".

The group's popularity waned by the '90s, and Prince Markie Dee left the group to pursue solo interests. In 1991, the remaining two members (Kool Rock Ski & Buffy, The Human Beat Box) carried on as a duo and released Mack Daddy (1991); but soon disbanded the group. Regardless, the Fat Boys are fondly regarded as a seminal part of early rap music recording history.

Although there was talk of a Fat Boys reunion, nothing materialised. By December 10, 1995, it became an impossibility when Buffy, the Human Beat Box died of a heart attack in Rosedale, Queens, New York. He was 28 years old and reportedly 450 lbs.

The Best Of The Fat Boys CD2

The Best Of The Fat Boys CD1

The Fat Boys Are Back