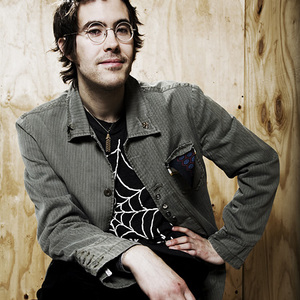 Elvis Perkins (born February 9, 1976) is a folk-rock singer-songwriter. He is the son of actor Anthony Perkins (an Academy-award nominated screen actor best known for his role as Norman Bates in Alfred Hitchcock's Psycho) and photographer Berry Berenson. He was raised in Los Angeles, California and New York City. Perkins is a great-grandson of the fashion designer Elsa Schiaparelli and a nephew of the actress Marisa Berenson.

Perkins's melancholy songs reflect the personal tragedy he has experienced over the years. His father died of AIDS in 1992. His mother was on board a flight that was flown into the World Trade Center on September 11, 2001. His debut album, Ash Wednesday, a chronologically sequenced album of songs written before and after his mother's death, was released in February 2007 by XL Recordings with a lead single called "All The Night Without Love". Perkins had help from his elder brother, Oz Perkins, on drums and friend Ethan Gold who produced, arranged, and mixed the album. The album includes backing vocals by Ariana Lenarsky, Shana Levy of indie band Let's Go Sailing, and Becky Stark of Lavender Diamond among others.

His second album, Elvis Perkins In Dearland, will be released on March 10, 2009

There Go The Nightmericans (CDS)

While You Were Sleeping (CDS)

All The Night Without Love (EP)