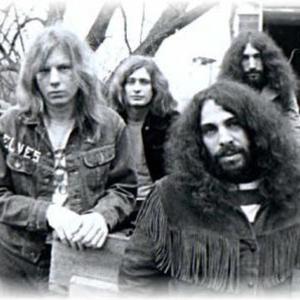 Elf, was a blues-rock band founded in 1967 in Cortland, New York, United States by singer Ronnie James Dio (Ronnie Padavona), guitarist and vocalist Doug Thaler, drummer Gary Driscoll, and guitarists Nick Pantas and David 'Rock' Feinstein (Dio's cousin). The band was orignially called The Electric Elves, but was shortened to The Elves, and finally Elf in 1969. In 1970 the band was involved in an automobile accident which claimed the life of Nick Pantas, whom the band decided not to replace. After recovering from his injuries, Doug Thaler quit the band, and was replaced by Micky Lee Soule.

(Upon leaving in 1972, Thaler moved to New York and got a job as a booking agent ? Elf was one of the bands he booked. In 1983, he became co-manager of M&ouml;tley Cr&uuml;e. Present day he works at Metropolitan Talent as an artist manager, working with artists such as Art Garfunkel, Bruce Hornsby & Ratdog).
Cover of Elf's debut self-titled album was produced by Deep Purple members Roger Glover and Ian Paice, who happened to see Elf auditioning in 1972. For the next few years, the band enjoyed mild success as an opening act for Deep Purple.
Dio both sang and played the bass guitar until, in 1973, bass player Craig Gruber was asked to join. The same year saw Feinstein quit the band, to be replaced by Steve Edwards. Feinstein formed a band called The Rods, which met with a moderate amount of success, touring with groups such as Judas Priest and Iron Maiden, as well as Metallica, before finally retiring from the music industry. He would not return to the music scene until 2004, when his band, Feinstein, released the album Third Wish on the Magic Circle Music label.
In 1974, Dio was asked by Glover to sing on his solo album The Butterfly Ball and the Grasshopper's Feast. Dio's rich, soulful voice gained the attention of guitarist Ritchie Blackmore who had just left Deep Purple and was looking for musicians for his first solo album, Ritchie Blackmore's Rainbow. He decided to use Elf for this album, and the band Rainbow was thus formed, with Blackmore replacing Edwards. After they finished recording the album, however, Driscoll, Gruber, and Soule were replaced by Cozy Powell, Jimmy Bain and Tony Carey, who played with Dio and Blackmore during the subsequent tour. In early 1975 percussionist Mark Nauseef joined Elf, but the group disbanded shortly afterwards

Trying to Burn the Sun (Vinyl)

Live At The Beacon (Vinyl)