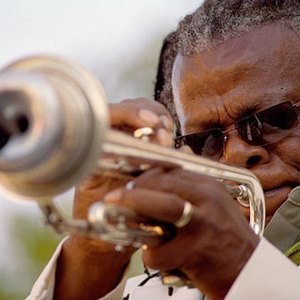 Eddie Gale (b. 1941, Brooklyn, NY, USA), is a jazz trumpeter. At an early age, he recalls listening to gospel and blues, with his family. As he remembers, "This was the beginning of my music career. I often participated in neighborhood singing groups where I developed a fondness for vocal ensembles." Gale joined the marching band of the local scouting troop. There he learned to play the horn and marched in parades for many years.

At an early age, he recalls listening to gospel and blues, with his family. As he remembers, "This was the beginning of my music career. I often participated in neighborhood singing groups where I developed a fondness for vocal ensembles." Gale joined the marching band of the local scouting troop. There he learned to play the horn and marched in parades for many years.

His early jazz education included trumpet lessons from the great KENNY DORHAM and others as well as serious woodshedding. There were many after-hour jam sessions where he had the opportunity to sit in with such musicians as CEDAR WALTON, WILBUR WARE, ART TAYLOR, ART BLAKELY, MAX ROACH, JACKIE MACLEAN, ILLINOIS JACQUET, SONNY STITT, CECIL PAYNE, MATTHEW G, SCOBY STROMAN, WYNTON KELLY, RANDY WESTON, WILLIE JONES AND PIANIST ERROL CLARK (who knew GALE from the BOY SCOUTS marching band). "I remember spending many hours with my friends who were into jazz music and we would listen to all the recordings that we could get our hands on. This is where I fell in love with the different trumpet styles such as LOUIS ARMSTRONG, ROY ELDRIDGE, CLIFFORD BROWN, KENNY DORHAM, MILES DAVIS, DIZZY GILLESPIE, CLARK TERRY, ART FARMER, WEBSTER YOUNG and BOOKER LITTLE, and developed a fondness for HARRY JAMES, DONALD BYRD, LEE MORGAN, BLUE MITCHELL, FREDDIE HUBBARD, CHET BAKER and BILL HARDMAN. In the circle of musicians who I developed around, it was important to know how to jam on the tunes of MONK, MILES, CHARLIE PARKER, and SONNY ROLLINS, on and on, in order to be able to ?sit in'. Then came the ?new thing' by JOHN COLTRANE, CECIL TAYLOR, SUN RA, ORNETTE COLEMAN, ALBERT AYLER, ERIC DOLPHY, CHARLIE MINGUS, ARCHIE SHEPP, and JACKIE MACLEAN. MAX ROACH turned me on to a gig which featured voices from my GHETTO MUSIC album. When I thanked him, he told me that I was one of the first musicians to ever thank him. One evening, SONNY ROLLINS and I stood looking out his window overlooking the city discussing music and the idea of playing together."

In the early ?60s, GALE was introduced to SUN RA by DRUMMER SCOBY STROMAN. EDDIE found SUN RA very intriguing. He spent many hours exposed to SUN RA's philosophy about music and life. As EDDIE explains, "Playing with SUN RA is a great experience--from the known to the unknown. You play ideas on your instrument that you never imagine. His music provoked me to explore the use of trills, for instance, and the placement of whole tones and then a space chord--ideas you do not find in the exercise books. Traveling with SUN RA is also interesting. He had me play the role of straw boss one time and it required me to pay one of the musicians to not play on a particular job. SUN RA, the master psychologist."

There were many recordings, rehearsals, and different performances and it was difficult to keep track of them and who performed on which album. In those days, the recordings were produced on SUNNY'S label, SATURN based in Chicago.

SUN RA gave GALE the position in the band that was right next to the piano because SUN RA thought this would help EDDIE develop the avant garde trumpet style that complemented SUNNY's music. There were times, as GALE recalls, when he tried to join with the other brass players and was simply told to return to his spot near the piano. SUN RA, the disciplinarian.

JOHN GILMORE, MARSHALL ALLEN, and PAT PATRICK helped GALE to be able to play in the ARKESTRA in the beginning. SUN RA dubbed GALE the original avant garde trumpeter. GALE first met SUN RA's family in the early ?90s when he went to Birmingham, Alabama during SUN RA's last days on the planet.

During the mid ?60s, GALE went on to perform and record with piano great CECIL TAYLOR, where GALE learned more about different musical structures and presentations that were reminiscent of classical performances. According to GALE, "TAYLOR first heard me during a loft jazz session where I was playing with SUN RA. TAYLOR's method of teaching you his music allows you the space to improvise openly--it is built into his structures and themes." One example is the tune ENTER EVENING from the UNIT STRUCTURES album. This piece is also included in the SMITHSONIAN COLLECTION OF CLASSIC JAZZ. "C. T. had me perform the muted trumpet, as I recall, and it gave me the opportunity to express melodic ideas about the subject with a muted sound." Traveling and performing with CECIL offered the sophisticated edge. GALE first came to California when he performed in residence with the CECIL TAYLOR UNIT and played the BERKELEY JAZZ FESTIVAL, which also featured MILES DAVIS and CARMEN MCRAE.

BOOKER ERVIN first heard GALE while he was playing at SLUG'S with CECIL TAYLOR. They later performed together at the East Cultural Center in New York.

GALE later recorded with ORGANIST LARRY YOUNG. As GALE remembers, "It was a different challenge. You had to do creative and avant garde type things with your solos over standard structures. The session was a lot of fun and it was exciting to play with LARRY YOUNG and JIMMY SPAULDING at the same time. YOUNG really pushed you with his organ and his unique sound."

GALE had the opportunity to know and sit in with JOHN COLTRANE on many occasions. EDDIE developed a great admiration for COLTRANE at this time. Having a family at a young age, GALE often had to work during the day and play music at night. He lost several day jobs because he would take his horn and practice during lunch hour and would get back late, if at all. He found himself uptight one particular time and JOHN COLTRANE got his horn out of the pawn shop. COLTRANE told GALE to never stop playing the trumpet the way he played it. GALE missed a recording opportunity with JOHN COLTRANE on the ASCENSIONS album. He was out of touch with COLTRANE at that time and could not be reached. To GALE, JOHN COLTRANE represents the spiritual expression of music. GALE also received encouragement from JOHN's wife NAIMA. She encouraged him to listen to JOHN and assured him that JOHN would help him. One of GALE's most memorable performances was at THE HALF NOTE CLUB where GALE and JOHN GILMORE played with COLTRANE on a set that featured ELVIN JONES, MCCOY TYNER and JIMMY GARRISON.

GALE was also a Brooklyn neighbor of the great pianist BUD POWELL, who encouraged him to keep playing music. GALE frequently visited with BUD and BUTTERCUP at their home.

Due to the efforts and belief of FRANCIS WOLFF in Eddie Gale, between 1968-69, GALE recorded two albums as a leader for BLUE NOTE RECORDS--EDDIE GALE's GHETTO MUSIC and BLACK RHYTHM HAPPENING. The personnel on the GHETTO MUSIC album included two bass players, JUDAH SAMUELS and TOKYO REID, and two drummers, T. SQUIRE HOLMAN and RICHARD HACKETT. The second album, BLACK RHYTHM HAPPENING, featured ELVIN JONES, JIMMY LYONS, MATTATHIAS PEARSON, and ROLAND ALEXANDER. Eleven voices were featured on both albums including CHUCK DAVIS (who later began his own dance troupe), FULUMI PRINCE (who later joined HARRY BELAFONTE), and MILDRED WESTON (former wife of RANDY WESTON). The music received rave reviews. GALE toured on the East coast with his 16-piece group which included on guitar his sister JOANNE STEVENS, who also wrote lyrics for some of the songs on both recordings.

When his contract with BLUE NOTE ended, GALE dismantled the group and moved to California, returning to STANFORD UNIVERSITY as artist-in-residence. This project was arranged by poet JOHNNY SCOTT, radio personality BUFF POHAM, and STANFORD football star NATE KURTMAN. In 1971, GALE played with his own group during halftime at the STANFORD-CAL BIG GAME and also at the STANFORD MEMORIAL CHURCH.

At the conclusion of this project in 1972, GALE moved to San Jose, where he currently resides. In 1974, he received the honorary title SAN JOSE's AMBASSADOR OF JAZZ from then MAYOR NORM MINETA for his efforts to help bring jazz to San Jose. At this time he also began a Liberal Arts program with an emphasis on music at SAN JOSE STATE UNIVERSITY. GALE also serves as MUSIC AMBASSADOR for the ASSOCIATION OF WORLD CITIZENS in San Francisco.

Gale appears in WHO'S WHO IN CALIFORNIA and was recently nominated to appears in WHO'S WHO IN THE WORLD (1999). Gale was introduced to ASCAP (American Society of Composers, Authors and Publishers) by DR. BILLY TAYLOR and has been a member since 1969. Favorite projects: Annual Family Picnic, Musician's Health Care Fund, Music in our Public Schools, Sickle Cell Youth Summer Camp, Students for World Peace, Tributes to SUN RA, JOHN COLTRANE and SCOBY STROMAN.

A MINUTE WITH MILES (Mapleshade Records)

"...A suite depicting jazz music from its African origins through swing and bop to modal jazz and beyond." "...a communiqu? from a hidden treasure of creative jazz, a real find."

"Great for jazz lovers who are not into the typical frenetic, addictive culture. Good background for conversation, driving or other quiet activities. Good sounds"

"...(Gale) is just about as individualistic voiced a horn player as you'll find."

3-1/2 stars. "The future of jazz depends on players like Gale making new contributions to its vocabulary."

Reporting on a performance, "Most of Gale's music was based on strongly stated riffs built layer on layer rather than in the more usual call-and-response patterns of jazz.

These riffs were, in essence, very much like those that once turned on the dancers at the Savoy Ballroom in Harlem or the Playmor in Kansas City."

"'GHETTO MUSIC' and the other recordings simply cannot give you more than fractional insight into GALE's ideas and capabilities in person. His is a unique, continuous melodicisim, one that leaps out explosively, thrashing fully-formed at the listener, opening ears and eyes as never before. His genius comes in many ways - unerringly controlled motion toward resolution of the tensions he so meticulously builds in space, the poignancy of his manipulations of sound, the bending and fragmentation of notes and times, the sheer depth of a lyricism that carries artist, sound, and listener as one to a final peaked consummation. Words are superflous; if you can't understand, LISTEN."

As a Side Man