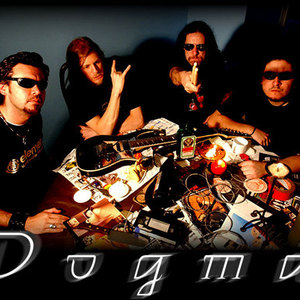 ************* A Slovak death/grind metal band
==
* DOGMA (dogma_sp.kit.net) is a brazilian rock band formed in 1988 in Maring?, a city in Parana State. Working in the alternative rock circuit, the band was released two albuns with Kairo?s Studio e Studio EwV ?udio, both from Maring?. After plaing in some rock festivals, DOGMA received a great critical from Marcio Okayama in the Brazilian version of Guitar Player and be elected one of the great underground bands of BR 102, a brazilian rock program in the Kiss FM (www.kissfm.com.br), a rock station thats play only classical rock. All the DOGMA songs are available for FREE DOWNLOAD in the official site dogma_sp.kit.net.

** DOGMA is a Brazilian progressive rock band, formed by Roberto Campos and Bar?o in the early 90s. The band released two albums. Their debut album, titled "Album", was released in 1993. That year, the band opened for Rick Wakeman at some gigs in Brazil, and the album was sold in Europe and Japan. The second album, Twin Sunrise, was released in 1995. In 1996, Bar?o died of a heart attack; the band split one year later.

==
*** DOGMA is an alternative metal four-piece from New York which formed from the ashes of the band Law & Order. They released one album, 1997's "Feeding the Future," on the Polygram label.

==
**** DOGMA is a death metal band from Lviv, Western Ukraine. Music of the band is possible to describe as a melodic death metal. Members include guitarist Vitaly Yatsuk, Dennis "Kuka" Kukushkin, Vlad Khmarsky, and Shopa Roman.

==
*****
DOGMA is a Chilean trash metal band. Their sstory begins on May 22, 1993, with the first stable compound by: Gabriel Almazan (guitar-vocals), Sebastian Rojas (drums), Gustavo and Mauricio Romero (bass / guitar, respectively). Gabriel and Sebastian had previously worked fixing some issues before meeting the other members.

In 1994 they record the first demo tape entitled 'TRUTH WITHOUT QUESTION "with three original songs from the band soon sold all copies made. DOGMA was invited this year to close the first night of the Festival de Rancagua compared with about 4,000 people.
After some time of live performances in various places, taken out of the band and Mauricio Gustavo Romero, being replaced by Lucas Yaksic (guitar) and Sandro Trabucco (low) to early May 1995.

In late 1995, after having acquired extensive experience in the circuits 'under' the medium, DOGMA telonea the first performance in Chile, the Argentine group ANIMAL, repeating this pair in the Monumental Stadium in December 1996.

In mid-1996 there is the opportunity to record the first LP, entitled "IMPROVE THE SILENCE", which contains 11 original songs recorded and produced by Mariano Pavez and DOGMA, in studies of Horacio Saavedra "HYT" in Santiago de Chile.

The album was released on April 28, 1997 and received excellent feedback and criticism from the press, and the general public, being designated "IMPROVE THE SILENCE" as one of the albums highlights of the month for the program "Headbangers' of U.S. broadcaster MTV-music video.
Furthermore, because sales of the disc, Disco Fair Dogma invites to participate in a press conference in mid-1997, which spoke of "IMPROVE THE SILENCE" as one of independent disks greater acceptance in the year .

In late 1997 it was possible to realize the first video clip of single "Demadness" which together with the rotation of the singles on Radio Concert and granted interviews such as the program More Music (UCTV) performing live the single "Demadness "achieved a greater diffusion of the band in the national music market.

The year 1998 included live performances outside of Santiago to Chillan, Copiapo Valparaiso and with great acceptance. Additionally, the cartel's lead No. 26 Anniversary Concert at the Discotheque Radio Zoom compared with around 1,300 people, along with the presentation of the album "Garage Inc." by Metallica in front of about 700 well-cemented the image of the band. He even gave an interview to the magazine Miss 17 on the occasion of Dogma rotation on the radio.
In 1999, the income of Dogma to the network on the site MP3.com has brought international exposure Dogma music with very good results and comments, the fact you can listen to the band's material on the site has expanded the horizons of Dogma target market, granting an interview about the Film and Video program TVN.

In late 1999 the band rejoins Yaksic Lucas (guitar). Then, under the executive production of FIRE WORKS MUSIC, recording the second album "$ uper FiX" Akustik studies of Santiago de Chile, with the joint production of Mariano Pavez. The new disc contains 14 tracks, including a remake of the theme of "Runaway" by Del Shannon. This album shows a new stage of Dogma, more experimental and more production on the issues. Finally the new album comes out under the Big Sur Records label in June 2000.

Dogma was chosen from a group of bands worldwide by the American label Progressive Arts Music to form part of the album: "THE Loudest TIMES ... A tribute to the 80's" with the subject of Metallica "Ride the Lightning", this record will distribution throughout the world through licensing Progressive Arts Music and is sold by amazon.com, tower records.com and other similar sites.

With over 200 live performances to date, promoting his album Dogma $ uper Fix, with a complete media plan and actions for years.

The output of the new album brought with it the opportunity to participate in audiovisual projects, where FiX items as "Mental Breakdown" and "Intensive Scare" are part of the soundtrack of "Black Angel" (the first Chilean horror film) nominated for MTV Movie Awards as "Best Picture of the People 'and' Dust thou art '(national short) respectively, even in the latter requiring the use of several passages from the $ uper Fix within the short itself.

The new version of the $ uper FiX CD includes a multimedia section (enhanced CD) where among other new features are the lyrics to the themes and videos "Demadness 'belongs to' IMPROVE THE SILENCE" and the video for "Runaway (2K) second single format FiX promotional film, directed by Jos? Szlam. The video in question was three weeks number one nationally in the music channels X and is in ranking within the top 10 orders from U.S. broadcaster MTV music.

In early March 2001, the band is removed from Trabuco Sandro was replaced by Leonardo Henriquez on bass, completing the lineup stable DOGMA to date.

Now with the final formation, the band is working on new songs, which definitely are part of the third studio album from the band, including 7-string guitars and samplings of various kinds so as to achieve a strong and distinctive sound. This CD includes six new tracks (2 covers), a version of Rave Mix Cancer Trust and some live tracks, as well as a demo of "Ruoka", the theme was to be included in Improve The Silence, and which, by various reasons was never included in the plate.

The new songs were recorded between October and November by Mariano Pavez Akustik Studios, while the mastering of the album was made by Joaquin Garcia Clio Studios.

==
********** Dogma is a portuguese rock band from Porto, Portugal formed by Bruno Salgado, Miguas, Pedro Sousa Guedes and Rodrigo Barbosa. Their Debut EP titled "O Segredo" was released in 2007 and they are currently recording their first LP. Official website: http://www.ouvedogma.com

The band was created in 2008 in Yerevan....It was found by two very famous musicians ? bassist Vardan Grigoryan and guitarist Heno Grigoryan, who both played in the legendary MDP band from 1994 to 2007.

In December 2007 a young and charming vocalist Zara, who was totally unknown to the music sphere, joined Vardan and Heno. Soon after that, on January 3, 2008, Derik Vardumyan, who is a famous musician and drummer in the metal sphere of Armenia, teamed up with them.
The first private concert of the band took place on January 5, 2008, in the small hall of the Yerevan State Puppet Theatre in front of an audience of just friends, musicians and journalists. It turned out to be something impressive indeed, something rather unexpected. And this was Dogma's triumphal start.
Official website: www.dogma.am

Dogma (or Dogma 3000) is a Croatian goa trance project, with Damir Ludvig and Goran ?teti? as the main writers and producers.

In 1997 they released their fantastic debut album Land of Utopia for the UK Blue Moon Productions. As they said themselves, 'we dedicate this album to the people around the planet who are aware of their subconscious powers...'

They've travelled around the world to lots of beautiful places and played in clubs in cities like NYC, London, Tokyo, Athens, Berlin and more, but the party in Taipei, Taiwan in 1997, as they say, sticks out the most.

They've been releasing various tracks in the following years and finalized with their album Dogma 3000 in 2001.

After that, unfortunally for the faithful listeners, they commited themselves to different projects.

A Good Day To Die