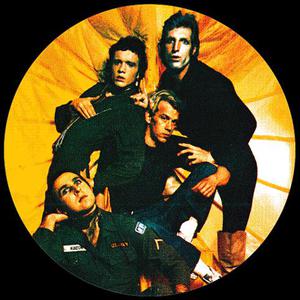 Doctors of Madness were a British protopunk rock band formed in 1974 in a cellar in Brixton, south London by the composer and lead singer/guitarist Richard Strange, known as "Kid" Strange. Active as a recording and touring band until late 1978, they found mainly cult level success and recognition that was not enough to sustain them, but they were later cited as a pivotal influence on the early British punk rock movement and their albums were re-released in 2002 on CD. Band history

To provide a platform for his musical ideas and compositions analysing urban neurosis and systems of control, Strange joined forces with Urban Blitz (electric violin, baritone violectra and lead guitar) Stoner (vocals, bass guitar) and Peter DiLemma (vocals, drums), ultimately providing a critical link between the early 70s progressive and glam rock of David Bowie and Roxy Music, and the later 70s punk rock of the Sex Pistols and The Clash. Doctors of Madness cited Velvet Underground and writer William Burroughs as major influences on their music.

Between 1975 and 1977, Doctors of Madness recorded three albums for Polydor records: "Late Night Movies, All Night Brainstorms" produced by John Punter, "Figments of Emancipation" recorded at Abbey Road studios with producer John Leckie, and "Sons of Survival". A post-breakup compilation, "Revisionism", was released in 1981, the band having split in late 1978. The first three albums were recently re-released on CD by Ozit Records.

Perfect Past: The Complete Doctors Of Madness CD3

Perfect Past: The Complete Doctors Of Madness CD2

Perfect Past: The Complete Doctors Of Madness CD1