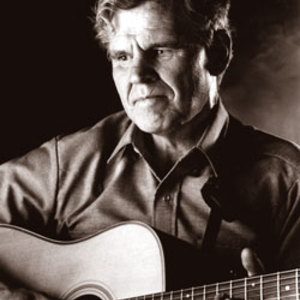 Arthel Lane "Doc" Watson (March 3, 1923, Deep Gap, North Carolina ? May 29, 2012, Winston-Salem, North Carolina) was a guitar player, banjo player, songwriter and singer of bluegrass, folk, country, blues and gospel music. Doc played guitar in both flatpicking and fingerpicking style, but was best known for his flatpick work. His virtuosity combined with his authenticity as a mountain musician made him a highly influential figure during the folk music revival.

Doc played guitar in both flatpicking and fingerpicking style, but was best known for his flatpick work. His virtuosity combined with his authenticity as a mountain musician made him a highly influential figure during the folk music revival. He pioneered the fast and flashy bluegrass lead guitar style which has been adopted and extended by others such as Clarence White and Tony Rice. He was also an accomplished banjo player and in the past had accompanied himself on harmonica as well.

In 1986 he received the North Carolina Award and in 2000 he was inducted into the International Bluegrass Music Hall of Honor. In 1997, Doc received the National Medal of the Arts from President Clinton.

He was generally joined on stage by his grandson and Merle's son Richard as well as his musical partner of twenty years, Jack Lawrence.

He was host to the annual MerleFest music festival held every April at Wilkes Community College in Wilkesboro, North Carolina. The festival features a vast array of acoustic style music focusing on the folk, bluegrass, blues and old time music genres. It's named in honor of Merle Watson and is one of the most popular acoustic music festivals in the world, drawing over 85,000 music fans each year.

In late May 2012, Watson was listed in critical condition but was responsive at Wake Forest Baptist Medical Center in Winston-Salem, North Carolina, after undergoing colon surgery. Watson had fallen early in the week. Watson did not break any bones, but an underlying condition prompted the surgery. Watson died on May 29, 2012 at the medical center at the age of 89.

In My Dear Old Southern Home

Then And Now (vinyl)