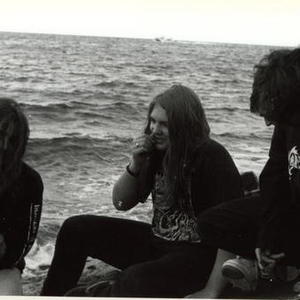 1) Disembowelment (often written diSEMBOWELMENT) is a Australian death doom metal band from Melbourne, Australia that was formed in November 1989 out of the ashes of two-piece grindcore band Bacteria, featuring drummer Paul Mazziotta and guitarist/vocalist Renato Gallina. With the help of Dean Ruprich from Melbourne death/grind band Necrotomy providing session bass, the band released its first demo, "Mourning September" in September 1990.

Disembowelment played a very slow form of doom metal (with occasional bursts of great speed) that relied equally on the atmospheric effects of droning guitars and constant riffing. The band was known for its atmospheric chanting, slow riffs and spiritual dark elements present in their symphonic, heavily distorted style. They are often credited with spawning the funeral doom movement that developed years later.

Over the 3rd & 4 August 1991, the band went back to Double Tea studios to record their second demo "Deep Sensory Perception into Aural Fate". This recording marked a big step forward in the maturity of the songwriting, performance and overall production. The demo sparked the interest of Relapse Records, who promptly signed them up and released the demo as the "dUSK" Ep in 1992. This was an edited version of the demo that omitted the linking piece of music between the two songs. It also included the first recorded version of "Cerulean Transience Of All My Imagined Shores", a 3rd track not featured on the original demo.

At the end of '91, Matthew Skarajew (Sanctum lead guitarist) joined the band and recorded for the "Cerulean Transcience" track the following year. Initially as full time bassist for the Cerulean session & album, ultimately adding guitar tracks (acoustic and melodic) on the album. He later switched to guitars for the (never recorded) 'covers' E.P.

The 1993 album "Transcendence Into the Peripheral" featured a slowly executed drumming style, accompanied by death metal vocals, chants and passages of dark ambience.

Disembowelment split up after the album's release. Prior to breaking up, the band had mentioned in interviews about a one-off live show that 'would be an event, a unique concert'. This never eventuated.

At this time the band also rehearsed and prepared 5 cover tunes for a potential E.P release. 'Slaughtered Remains' (Necrovore) was a demo track that appeared on the bonus extra disc of the (limited) re-release years later. This featured Paul on drums, Matt on guitars and Renato layered a vocal track on it 3 years later.

Gallina and Skarajew continued working together in the ethno ambient act Trial of the Bow which Skarajew had originally initiated during his time in Disembowelment. Releasing an E.P 'Ornamentation' and Full length album 'Rite of Passage' to critical approval by the press of the day, notably Rolling Stone and Wired Magazine. Trial of the Bow was licenced to Rykodisc soon after.

Skarajew and Mazziotta have since formed a grind band called Pulgar. (active since 2004)

The band's entire recorded catalogue was re-released as a double and limited edition triple CD by Relapse in 2005. Two different 'Limited Edition' Vinyl Box sets have since been released and have now sold out.

The band "reformed" under the guise of D.usk in 2010, featuring original members Matt and Paul. d.USK transformed into Inverloch, which recently released an EP entitled Dusk | Subside.