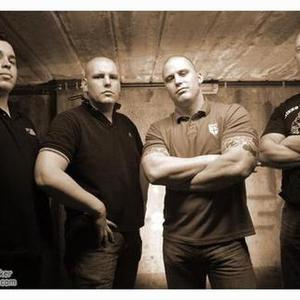 There are currently two bands called Discipline. One of them is a Dutch skinhead band and the other is a prog rock band from the USA. Both biographies follow. DUTCH BAND: Discipline is a Street Rock ?n Roll band, hailing from Eindhoven, Holland. These guys have been around since 1990. In the early days they had a different name and a different line-up. The current line-up is: Joost De Graaf Vocals Carlo Geerlings Bass Erik Wouters Guitar Joost Strijbos Drums On stage the boys are being backed up by Berry Black (Judasville, ex-The Spades, ex-Lovesteaks) on guitar as well.

Discipline is a Street Rock ?n Roll band, hailing from Eindhoven, Holland. These guys have been around since 1990. In the early days they had a different name and a different line-up. The current line-up is:

On stage the boys are being backed up by Berry Black (Judasville, ex-The Spades, ex-Lovesteaks) on guitar as well.

After 5 years of struggling and making some demo-tapes, in 1995 Discipline signed to Lost&Found Records from Germany.
The 1st release was the 5-track ?Stompin' Crew EP? in the summer of 1995. This one was followed up by their 1st album ?Guilty as Charged? in 1996. The reactions to this dynamite Streetcore-album were overwhelmingly positive and the guys did a lot of shows, including a european tour with The Business to promote this album all over Europe.
Early 1998 the ?Bulldog Style?-album was released, also by L&F Records. On this record Discipline already tried to combine the best of both worlds: Oi meets Hardcore. This album was a huge success again in the underground scene. Through hard work, the band gained itself a reputation of doing very energetic liveshows.
But like always, there was also another side to the coin??The amount of violence and fights at shows was growing and after a while Discipline almost got crucified for that.
Luckily, after some time the air cleared and the negative publicity stopped.
Unfortunately the relationship between band and recordlabel went downhill. The band decided to leave and signed to I Scream Records from Belgium.

The first release on the new label was the ?Nice Boys Finish last? album in 1999. With this release Discipline definitely earned herself a place at the top of the entire European Street Rock -scene. To promote this album Discipline did a few European tours again with the likes of Agnostic Front, Dropkick Murphy's and US Bombs.
These Dutch thugs also managed to get this album released in the US by Too Damn Hype Records.

This record was followed by the ?Love thy Neighbor? album towards the end of 2000. One month earlier the ?Hooligans Heaven EP? was already released. This song turned out to be a true ?hit-single' in the underground-scene and to the Hardcore football crowd.
To promote the album, Discipline was part of the ?UNITY-Tour 2000?, with the likes of Agnostic Front, Ignite, Shutdown and The Forgotten.

The summer of 2003 saw the release of the ?Everywhere we Go? single. This song is another football-anthem and has proven to be a real classic by now!
A few months later 2 albums were released at almost the same time. First there was the release of the live-split album with long time brothers Agnostic Front from New York City and a few weeks later the long-awaited new full-length album ?Saints & Sinners?.
To promote this album the boys were part of the first Eastpak Resistance tour in Europe and did their first US-tour with the likes of Dropkick Murphy's, AF, Hatebreed and Murphy's Law.

Early 2004 the lads hit the studio again to record 3 brandnew songs and 3 cover-versions for the split-CD with longtime mates Argy Bargy.
These new songs are the best they have ever done: 6 hard-hitting, melodic songs with aggro and a hardcore beat!! ?100% Thug Rock? was released through Captain Oi! records in march 2004. One of the new songs titled ?Red & White Army? is already the Football-Anthem for 2004.
To promote this latest release the boys played at all major summer-events again and did many headlining clubshows.

Through lots of touring and doing shows, Discipline has earned herself a large crowd of loyal supporters all over Europe and the US. Besides having done many headlining tours, the band has also shared the stage with the likes of Agnostic Front, The Business, Cock Sparrer, Madball, Sick of it All, Dropkick Murphy's, Cockney Rejects, Biohazard and Ignite. The last few years they managed to play at all the major European festivals like Dynamo Open Air, Graspop, Holidays in the Sun, With Full Force, Pressure-Fest, Punk&Disorderly, Vans Warped Tour and the European HC Parties.

The members of Discipline. originally met as high school students in Royal Oak, Michigan in 1985. They gained a following in the Detroit area partly because they performed challenging, original music, and partly due to their strange live shows. Lead singer, Matthew Parmenter, delivered each song in a different costume behind a thick coat of mime's makeup. Their studio release, Unfolded Like Staircase (1997), features Jon Preston Bouda on guitar, Mathew Kennedy on bass, and Paul Dzendzel on drums.

Unfolded Like Staircase boasts three fifteen-minute songs including Canto IV (Limbo), as well as a twenty-two minute epic entitled Into the Dream.

It seems Discipline. has become a mainstay of the international underground movement known as progressive rock. A few dozen radio shows around the world, and an equal number of prog-oriented publications have found in Discipline. an unflinching anti-commercialism and dedication to songwriting. Once eschewed by Discipline., the "progressive" moniker is now an accepted label used to distinguish this band from the bulk of popular commercial music.

After the release of their first CD, Push & Profit (1993), Discipline. played numerous shows throughout the U.S., sharing bills with new and established artists such as Ozric Tentacles, Steve Howe of Yes, Anekdoten, and Echolyn. Discipline. has been featured on radio shows in Europe and North and South America, and the band flew to Norway for a mini-tour at the request of a Norwegian college. Unfolded Like Staircase and Push & Profit are released on the band's independent label, Strung Out Records.

Captives Of The Wine Dark Sea

This One's For England CD2

This One's For England CD1

To Shatter All Accord