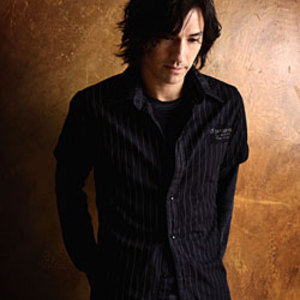 David Usher (born on April 24, 1966) is a British-born rock singer-songwriter, and renowned humanist, who lived for a number of years in Montreal, but then moved to the East Village in Manhattan, New York City. In 2007 David and family moved back to Montreal permanently after having a holiday there. Formerly the frontman of the Canadian band Moist, he more recently embarked on a solo career. David Usher was born in Oxford to an ethnic Thai Buddhist, artist Samphan Usher and a Jewish Montrealer, Dan Usher, who is an economist at Queen's University.

David Usher was born in Oxford to an ethnic Thai Buddhist, artist Samphan Usher and a Jewish Montrealer, Dan Usher, who is an economist at Queen's University.[1] He has relocated to Malaysia, New York, California and Thailand since early childhood before his family settled in Kingston, Ontario. He attended high school at Kingston Collegiate and Vocational Institute.

Attending university at Simon Fraser University in Burnaby, British Columbia, Usher joined Moist in 1993 and their 1994 debut release, Silver, went quadruple platinum in Canada. As the lead singer of the band, he shot to stardom with his soulful voice and vaguely exotic good looks.

After Moist's multi-platinum follow-up, Creature, was released in 1996, David took some time during the band's hiatus to record his debut solo album, Little Songs, released in 1998. That same year he married photographer and actress Sabrina Reeves, with whom he is still living. Together they have a daughter, Coco, who was born on January 12, 2003.

After recording the album Mercedes 5 and Dime with Moist, he revived his solo career again, releasing the highly successful Morning Orbit in the summer 2001. It contains the hit single "Black Black Heart". In 2003, he released another solo album entitled Hallucinations, which matched the amount of major label albums he had recorded with Moist.

In 2005, he surpassed that number with the release of If God Had Curves. The album had a resemblance to his first solo effort Little Songs, as it is dominantly an acoustic album. This album also featured a collaboration with Tegan Quin, on the track "Hey Kids".

2007 David and family have moved back to Montreal, Canada and David's embarking on a tour in September/October and November 2007.

Wake Up And Say Goodbye

If God Had Curves