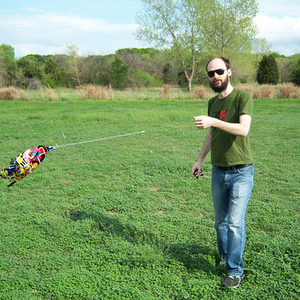 David Karsten Daniels is a Dallas-based songwriter by way of Alabama, North Carolina, Oregon, and San Francisco whose music relays a personal history of diverse musical experiences - among them, a childhood of hymn singing, membership of a high school jazz band, and a formal university training in composition, theory, free improvisation, and performance art. For several years, David travelled throughout Texas and France recording quietly in small rooms...

David finished his studies and spent the subsequent year in Portland, Oregon, briefly experimenting with a laptop before moving to North Carolina with Daniel Hart and Alex Lazara to found the Bu_Hanan Collective. There, while giving his first two albums a wider release, he wrote and recorded the self-released album, 'Angles' (2004), as well as contributing to the records of the collective's other bands.

Since then, David's work has come increasingly into focus. With his debut, the beautifully ambitious 'Sharp Teeth' (released by FatCat January 2007), gone are the noise freakouts, drum programming, and obsessions with Steve Reich and John Cage. In their places are richly orchestrated songs in which his guitar and voice are the foundational elements fleshed out by up to nineteen musicians and at least as many instruments.

Following his debut, David kept himself busy playing live (largely in the USA, with a smattering of European shows), writing and recording - the fruits of which can be heard on his 'Fear Of Flying' LP, released in April 2008. ?Fear of Flying' is a somewhat different proposition to 'Sharp Teeth', spreading itself over a more diverse sonic terrain, traversing a wealth of styles and ideas, presenting a more disparate yet immediate record, with David as ever managing to pull the reigns in tight enough to give the album coherence, context and meaning.

David also scored additional music for Frightened Rabbit's Christmas single, a re-issue of ?It's Christmas So We Will Stop', released in December 2008. June 2010 saw the release of the gorgeous 'I Mean To Live Here Still' album, a full-length written and recorded with Richmond, VA's 9-piece jazz ensemble Fight the Big Bull.