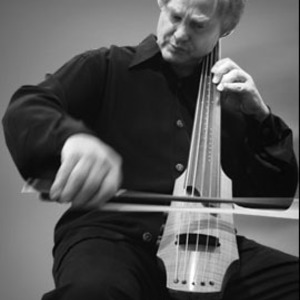 Darling was born on March 3, 1941 in Elkhart, Indiana where he began piano lessons at the age of 5 and the study of classical cello at age 10. His passion for music developed throughout his school years. In high school, he was principal cellist in the orchestra, played tuba in the concert band, sang with the madrigal singers and acapella choir, and played baritone sax in the pep band. He also led his own jazz ensemble in which he played double bass and alto saxophone.

David Darling attended Indiana State University earning his Bachelor's and Master's degrees in Music Education. During his college years he founded a jazz ensemble in which he played piano, saxophone and bass. He studied cello with internationally recognized artists/teachers: Lorne Monroe, Gilbert Reese, Fritaz Magg and Janos Starker, and pursued studies in music composition. He was a scholarship student with the Pierre Monteux conducting school and studied jazz performance at Berklee School of Music in Boston. Early awards include First Place in the Indianapolis Indiana Music Matinee' Solo Artist Competition, and a Scholarship to the American Federation of Musicians Strings Seminar. During these formative years he also pursued athletic interests in many sports with a concentration in competitive tennis winning numerous state High School and College competitions. Darling considers athletics and music to be kindred disciplines.

In the summer of 1970 Darling joined the Grammy Award winning Paul Winter Consort making his home in Nashville, TN. There he served as assistant principal cellist with the Nashville Symphony Orchestra and worked as a studio session player in the Nashville recording scene with the main focus of his career being the Consort, an extraordinarily progressive band for its time. The Consort sound was a rich blend of jazz, classical and world music incorporating, at times, the voices and sounds of nature. As a soloist, composer, and vocalist with the Consort, Darling was exposed at length to ensemble and solo improvisation. He retired from the Paul Winter Consort in 1987 to begin the exploration of a solo performance, teaching and recording career.

Darling's collaboration with long time friend, producer, sound engineer, and founder of Wind Over The Earth Records, Mickey Houlihan produced the 1981 release "River Notes" with Barry Lopez and the 2002 release "Refuge" with Terry Tempest Williams. The ever-popular, "Eight String Religion," (originally released in 1993 by Hearts of Space) was recently re-issued by Wind Over The Earth in 2001. " Eight String Religion" is one of Darling's most popular titles. Houlihan and Darling also produced "The Tao of Cello" in 1989, newly re-released in 2003 by Valley Entertainment. This new CD includes calligraphy and Taoist thoughts by longtime colleague Chungliang Al Huang, photographs by Beth Kingsley Hawkins, and extensive commentary by Darling. Also in the late 1980's Houlihan and Darling produced "Amber" with pianist Michael Jones, released on the Narada label.

David Darling established his cherished relationship with ECM Records and Manfred Eicher in 1979 with his appearance on Ralph Towner's ,"Old Friends, New Friends,"featuring Towner, Kenny Wheeler, Eddie Gomez, Darling, and Michael DiPasqua. In 1981, his first solo release for ECM, "Journal October," was met with critical acclaim. Additional solo recordings include: "Cello" in 1991 and "Darkwood"in 1993. Pulse Magazine placed "Cello" on their list of the 10 Best Contemporary Instrumental Albums of 1992.

ECM's "The Sea Group," a quartet with Darling and three of the label's most distinguished artists; composer & guitarist, Terje Rypdal; drummer, Jan Christensen; and pianist/composer/author, Ketil Bj?rnstad has released two CD's: "The Sea I" in 1994 and "The Sea II" in 1996. A tour of China is planned for "The Sea Group" in the fall of 2004. Darling continues to be inspired by the creative genius, artistic expression, and diverse talent associated with the ECM label. He is currently working on his fourth, soon to be released, solo CD.

Darling's music has long been recognized and sought after by producers and directors in the film industry which includes ongoing collaboration with European filmakers Jean-Luc Godard and Wim Wenders. Films with Godard include: "Nouvelle Vague" (1996), "Forever Mozart" (2000), "Mostly Martha" (2003) and "e'loge de l'amour" (2003) presented at the 2003 Cannes Film Festival. His films with Wenders include: "Until the End of the World" (1991) featuring Darling as solo improvisor and"Faraway, So Close!" (1993). Recently, Wenders and Darling collaborated on the production of a major television commercial celebrating the 50th anniversary of Italy's Barilla Co.

US major motion picture credits include: "Heat" directed by Michael Mann, starring Al Pacino and Robert deNiro (1997),"187" (1997), "Going Under" (2003), "Insider" (1987) and "Equinox" (1970). Short Films and Documentaries include: "The Magnificent Obsession of Everett Ruess," "Mirror On The Moon," "The Roar of the Heart" with Coleman Barks, "Canyonlands," "Some Songs To The Stars- a film based on the poetry of Ian L. McHarg," "Living Their Art," and "EcoDesign - a tribute to Buckminster Fuller."

Darling's self produced CD, "Cello Blue," issued by Hearts of Space and Valley Entertainment in 2001, earned rave reviews, a 2002 Grammy Nomination and also the AFIM Indie Award from the Association for Independent Music.

In 1986 David Darling co-founded "Music for People," an internationally recognized non-profit educational network dedicated to teaching and fostering music improvisation as a means of creative self expression. Music for People's training and certification program, now in its 18th year, continues to flourish in the United States and has recently expanded to offer seminars and workshops at the Center for Well Being and Creativity in Kiental, Switzerland. Mr. Darling has traveled extensively for over 40 years enthusiastically encouraging all humans to explore their musical talents and creative abilities. He has inspired and encouraged thousands at numerous wholistic facilities and retreat centers such as: Esalen, NY Open Center, Hollyhock, and Omega Institute.

Since 1986 Mr. Darling has worked for Young Audiences, Inc. a National "Medal of the Arts" award-winning organization, dedicated to enriching childrens' lives by providing in-school programs in the form of workshops, artist residencies, and guest performances. In 1995 he received the "Artist of the Year Award" by the Board of Directors of Young Audiences Inc, given "in recognition of his hard work, innovation and creativity in the service of arts-in-education." In 2001 David received the "Arts Advocate of the Year Award" presented by the Connecticut Music Educators Association for "His excellent work in music education and improvisation." He has contributed to a variety of recordings for young listeners and to the book "Open Ears; Musical Adventures for a New Generation," a compilation of writings for children by diverse musicians such as: Paul McCartney, Peter Seeger, and Mickey Hart.

In the past two years Darling has been arranging and composing material for the soon to be released, "Mudanin Kata" (The Way Home), recorded in the mountains of Taiwan with members of the Wulu Bunun Tribe. The recording combines traditional tribal voices, the sounds of nature, and Darling's delicate cello accompaniment. The CD packet includes a DVD which documents the journey and collaboration immersed in this remotely beautiful culture and country. David Darling and members of the Wulu Bunun Tribe will be touring Great Britian in the Spring of 2004.

In 2004 David Darling and Mickey Houlihan will release a companion CD in the likeness of "Eight String Religion;" Darling will be consultant/composer for noted photographer Gregory Colbert's project "Ashes and Snow" which includes installations in Paris and New York. Darling's original compositions were an integral part of Colbert's 2002 installation in Venice, Italy; A newly commissioned piece for Merkin Concert Hall's, "Thursday Night Series" will feature well-known baritone, Thomas Buckner. This original composition includes lyrics and music by Darling with text inspired by his love of Lao Tsu's, Tao de Ching. The performance in NY will feature: string quartet, piano, percussion, solo voice and cello. In addition to these projects, Darling is currently working on his latest solo release for ECM Records.

The Tao Of Cello