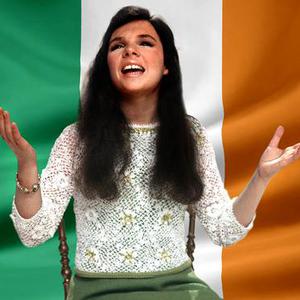 Scallon was born Rosemary Brown in Derry, Northern Ireland. In 1970 as a teenager she represented Ireland in the Eurovision Song Contest, singing "All Kinds of Everything" (written by Derry Lindsay and Jackie Smith), and brought home the country's first victory in the contest. She had some minor hits in the British and Irish music charts subsequently. Always religious, she became more famous for singing religious songs, such as "Totus Tuus", commemorating the visit of Pope John Paul II to Ireland in 1979.

In the 1980s, she moved with her husband, Damien Scallon, and family to the United States, where they were involved with a Christian broadcasting network. She returned to Ireland in 1997 to become a candidate for the office of President of Ireland where, though an independent candidate with no party political organisation behind her, she came in a credible third, ahead of the candidate of the mainstream Labour Party. In 1999, again as an independent, she contested and won a seat in the European Parliament representing the Connacht-Ulster European elections constituency.

She has declined to associate with any political party. She campaigns on "family values," most notably in her opposition to abortion. Her decision in 2001 to oppose a government proposed amendment to the Irish constitution to place some restrictions on abortion, which put her at variance with many pro-life organizations, the mainstream political parties and the Roman Catholic Bishops in Ireland, on the basis that in her eyes the anti-abortion amendment would introduce certain loopholes, lost her much of her original support. The defeat of that amendment was blamed on ultra-conservative elements, who were accused by other anti-abortion campaigners of destroying the likely last chance to impose stricter abortion restrictions in Ireland.

In 2002, Scallon contested a seat in Galway West in the Irish general election, again as an independent. In what was seen as a backlash against her stance in the previous abortion referendum, she lost disastrously, scoring just 3.5% of the vote in her constituency.

Scallon lost her seat in the elections to the European Parliament in June 2004, although her share of the vote on that occasion (13.5%) was somewhat higher than opinion polls had indicated in advance of the election.

In 2004, Scallon again set her sights on the office of President of Ireland, but incumbent Mary McAleese was elected uncontested when Scallon failed to secure a nomination.


2. Dana (??) (South Korean singer): Dana was born as Hong Sung Mi (???) on July 17, 1986. Initially a solo singer on Shining Entertainment label, she released her first album at age 15 in 2001. Though she was promoted by SM Entertainment, she did not officially became an SMTOWN artist until 2003. After one more solo album in at age 17 (plus a few tracks on SMTOWN winter and summer albums), Dana was placed in a four female dance/A Capella group ????/????-?. The group has changed their name in Korea and are now known as ???? The Grace.

3. Dana van Dreven (born July 8, 1974 in Amsterdam, Netherlands) aka DJ Lady Dana, is one of the world's leading Hardstyle DJs.

Dana started playing in 1993. It was never her intention to become a DJ, but she did, and is now the most popular female DJ in the Dutch dance scene.

DJ Lady Dana is without a doubt headliner of the hard dance scene. She is often referred to as the "Queen of Harddance". She has achieved the highest ranking spot as a harddance DJ in the English Mixmag top 100, which she first entered at spot fifty-five.

4. Dana Halabi, is a young Lebanese singer/performer, please change your tags to Dana Halabi to scrobble for her. Often characterized by critics as being the epitome of "everything that is wrong with Arabic pop" and "the video clip culture", Dana's silly lyrics (which she often writes herself), skimpy outfits, and catchy songs overshadow her lacking vocal talent. Her signature silliness, which has quickly become part of Arab pop culture, has been used several times by comedians and even for ads. Melody TV, the company that both launched her and produced her debut album, Inta Min, used her in one of a series of comedic commercials. Dana also sang the jingle for and acted in the commercial for the Sympathique fragrance.

5. Dana L. Stovall has done vocals on various songs related to Hula, K Fingers and Cajmere. Under the name Dana she has had 2 releases on Clubhouse records.

6. Dana Nalbaru former singer in Romanian band Hi-q. She now has her own solo career as Dana.

7. Dana, spanish singer, (Dana Woods) made an unique LP in 1991, "Diecisiete" ("Seventeen") produced by Alejo Stivel and with collaborations by Nacho Cano from Mecano.

All Kinds Of Everything