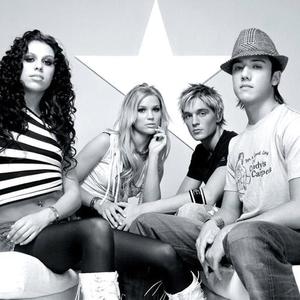 Please fix your tags with A*Teens. The clock is ticking. Soon the A*Teens will leave their teen years behind. But that's no problem for the Stockholm-based vocal quartet, who showcase a striking musical maturity on their new MCA album, POP TIL YOU DROP. In its twelve tracks, the album elevates the group to a higher stratum of sophistication, while retaining the same spirit of fun and freedom that made A*Teens one of the world's most popular young bands.

The clock is ticking. Soon the A*Teens will leave their teen years behind. But that's no problem for the Stockholm-based vocal quartet, who showcase a striking musical maturity on their new MCA album, POP TIL YOU DROP. In its twelve tracks, the album elevates the group to a higher stratum of sophistication, while retaining the same spirit of fun and freedom that made A*Teens one of the world's most popular young bands.

Since their 1998 debut, Marie, Amit, Sara, and Dhani have proven remarkably graceful under pressure. They gladly took on the rigors of stardom, constant travel, and high-stakes deadlines, all with a laugh and a smile. Along the way, they sold millions of records worldwide (including more than 1.5 million albums in the U.S. alone), and toured with the likes of 'N Sync, Britney Spears and Aaron Carter. They bring all that experience to bear on POP TIL YOU DROP, which includes several songs co-written by the group members themselves. "We were much more involved on this one compared to our previous albums," says Amit.

To create POP TIL YOU DROP, the A*Teens turned to top songwriting/production teams in Sweden and beyond, including Grizzly and Tysper (Think Productions); Mark Hammond; Chris Nelson (Maratone Productions); Peter Bostr?m; Tobias Lindell and Peter Bj?rklund (Tremolomusic.com); Red One (The One Productions); and David Eriksen (Murlyn Music AB).

The songs on POP TIL YOU DROP represent a broad mix of maximum-energy pop styles. One outstanding track is the A*Teens' take on "Can't Help Falling In Love," the #1 Elvis smash from 1961. The song is also featured on the soundtrack to the upcoming Disney animated feature "Lilo & Stich." Says Amit, "Our version is very different from what Elvis did, but that's the only way to go, because after all, Elvis is Elvis." Adds Marie, "When we first started out, we were all big Disney fans, and one of our biggest dreams was to have a song in a Disney movie. Well, here we are!"

Songs like "Floorfiller," the horn-heavy "Let Your Heart Do All The Talking," "Closer To Perfection," "This Year," and "Hi and Goodbye" blend upbeat rhythms, scathing synths, and picture-perfect vocal harmonies arranged by the A*Teens themselves. Other tracks, like "Slam," the Latin-flavored "Cross My Heart," "In The Blink of an Eye," and "Singled Out," were co-written by Dhani, Sara, and Marie. All in all, the album was an intense labor of love for the four. "More than ever, we put so much of ourselves in this album," says Sara. "It was really fun making it, and we're extremely happy with the results."

By their own admission, the A*Teens don't easily reach that benchmark. Young as they are, they've always possessed astute musical instincts and a drive for perfection that began early on. They first met as children when they all belonged to a youth dance company in Stockholm. "We used to hang out in our spare time," recalls Sara. By late 1998, once they'd decided to make music together professionally, things came together rapidly.

In May 1999, the A*Teens broke sales records in Sweden with their first single "Mamma Mia," which entered the Swedish charts at #1. After three weeks, it had sold 120,000 copies, becoming the best-selling single in Sweden that year, and remaining #1 for two straight months. Their debut album "The ABBA Generation" shipped in August 1999, also entering the charts at #1. It perched there for five weeks, and went on to triple-platinum sales in Sweden, and more than 3 million copies sold worldwide.

After conquering Scandinavia, the band took on the rest of Europe and the world. In 2000, they earned a European Platinum Award for 1 million sales on the continent. That September they received a Viva Music Award for Best International Newcomer, competing with the likes of Christina Aguilera and blink-182. Much of 2000 was spent touring the U.S.A. with 'N Sync and Britney Spears. By September, their hard work in the States started paying off as "The Abba Generation" passed Gold status on the way to Platinum.

The group followed this with their second album, the Gold-certified "Teen Spirit." Worldwide touring in the wake of its release brought new levels of success for the A*Teens. One highlight came as the band arrived in Thailand as part of their 2001 tour, finding their pictures on cans of Coca-Cola. Remembers Sara, "We were the first international artists ever to appear on a soda can there. They printed 15 million of them; we went home with ten!" By the end of 2001, the four were back in Sweden gearing up for the writing and recording of the new album. But by then, some things had changed.

"We traveled the world for three years," notes Amit. "All the people and cultures we experienced helped us grow in so many ways. We have a real global overview now." Adds Marie, "The biggest difference between now and earlier in our career is that we feel much closer to our families. Being away from them so much is hard. We truly appreciate what we have at home." Equally important, all four have come to strongly rely on each other as friends and colleagues. "We were close before the group," notes Sara, "but now we're like brothers and sisters." Adds Dhani, "Being in a tour bus with the same people every day, you're either gonna love 'em or hate 'em... we happen to love each other."

That's fortunate, since the months ahead will find A*Teens once again traveling the world performing before their countless fans. They will on a US tour that runs through the summer of 2002. Among the other places they hope to visit are Hawaii, Australia, and any tropical locales they can visit. "Hey, we're from Sweden," laughs Dhani. "We want to go surfing!" Still, they harbor even bigger aspirations. The four hope to do large-scale concerts ('a big world tour," exclaims Dhani) plunge deeper into writing and producing, acting, choreography, anything to challenge their artistic impulses.

Mostly, however, they hope to foster the kind of joy and healing only music can bring about. "What artists did here right after 9/11 was amazing," notes Amit. "Music should always have that kind of impact. We hope to make people feel a little better, and help them get through their hard times." It's a tall order, but with POP TIL YOU DROP, the A*Teens are well on their way.

I Promised Myself (CDS)

Let Your Heart Do All The Talking (CDS)

Let Your Heart Do All The Talk (CDS)

Pop 'Til You Drop!