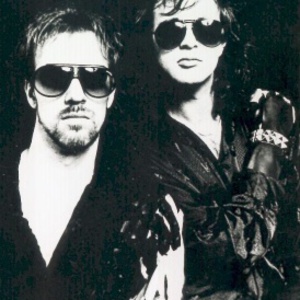 A Split-Second was an electronic body music band from Belgium. The duo ? Marc Ickx and Peter Bonne (under the artist name Chrismar Chayell) ? were active from their debut in 1986 until they split up in 1991, and A Split-Second continued as an Ickx solo project. After signing to Antler Records, A Split-Second made their debut in 1986 with the track Flesh. It was followed the next year by another single, Rigor Mortis, and the album Ballistic Statues.

After signing to Antler Records, A Split-Second made their debut in 1986 with the track Flesh. It was followed the next year by another single, Rigor Mortis, and the album Ballistic Statues.

In 1988 they were signed to American label Wax Trax! Records and released the albums A Split-Second and From The Inside in the U.S. The single Rigor Mortis made it to the top of the alternative dance charts (Rockpool magazine) and stayed there for weeks. The singles Mambo Witch and Colosseum Crash (featuring guest vocals by Dead Kennedys frontman Jello Biafra) were also chart-topping hits. New members Fedjean Venvelt (guitars) and Peter Boone (keyboards) joined the band for their first US tour.

Their 1990 album Kiss of Fury featured the track The Parallax View which was also a successful single and saw the band moving towards more of a guitar-based sound. Nicolas Mansy (keyboards) joined the band for their second US tour.

In 1991 Ickx became involved in a side project, Wasteland, which soon became more important for him than A Split-Second, which split up with Ickx continuing it as a solo project. Another album, Vengeance, was released in 1995.

A Split-Second's debut single Flesh is credited with starting the New Beat genre when DJ Marc Grouls played the 45 rpm single at 33 rpm in the nightclub Boccaccio in Ghent.