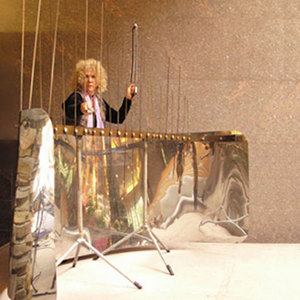 Constance Demby is a U.S. multi-instrumentalist player and composer. Identified with the New Age movement (as both her personal belief and the New Age music style), some of Demby's output is also classified as ambient or space music. Demby is also a singer, instrument designer, painter, sculptor, and multi-media producer. She is best known for her 1986 album Novus Magnificat. Constance Mary Demby was born in Oakland, California.

Constance Mary Demby was born in Oakland, California. She learned to play the classical pianoforte in her childhood and went on to become a multi-instrumentalist (including hammered dulcimer, vocals, synthesizers, and originally-designed custom acoustic instruments).

She studied sculpture and painting at the University of Michigan. It was both as musician and sculptor that her Sonic Steel Instruments, the space bass and the whale sail were created. An original design, her Sonic Steel Instruments have been recorded by Lucas Skywalker Studios for use in their filmscores, and also filmed by Discovery Channel at Gaudi's Parc Guell. The Space Bass is featured on Michael Stearns' soundtrack for Chronos.

In 1986, her album Novus Magnificat was released, self-defined as "Spacemusic" from its liner notes to its subtitle "Through the Stargate", with a space-themed cover (pictured at right) reminiscent of 2001: A Space Odyssey (whose novel version featured a "Star Gate"). Inspired by Western classical and sacred music, it was recorded with samples from real instruments played on the Emulator II digital sampler, and features sound textures by Michael Stearns. Though it wasn't nominated at the Grammy Awards, the album sold over 200,000 copies worldwide, making her one of the most successful New Age artists of the time and helped Stephen Hill to build his Hearts of Space Records' reputation.

Demby was the co-founder of The Central Maine Power Sound and Light Company, an experimental multi-media group that toured the east coast from 1971 to 1976 with programs such as Space Mass, a multimedia production launched in NYC combining painting, film, massive environmental sculptures, music, dance, and ritual. In 1978, Demby also founded her own record company, Sound Currents (also known as Gandarva, her recording studio) that released or re-issued half of her albums.

In 2000, Demby moved from Southern California to Spain in Sitges (outside Barcelona), and returned to the U.S. in July 2003.

Faces Of The Christ

Light Of This World

Novus Magnificat: Through The Stargate