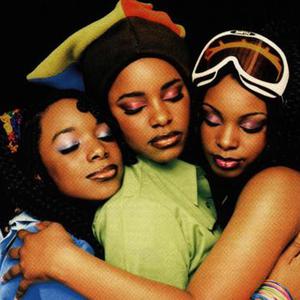 There is more than one arist with this name. 1. A British pop group 2. A Canadian singer 3. A Greek singer 1) The most well-known is a UK girl group consisting of sisters Cleopatra, Zainam and Yoneh Higgins. The first time the girls stepped on stage they were known as Cleopatra And The Attractions; at that point Cleo was the lead singer and her sisters were backing singers/dancers. They later dropped that name and became known as the band Cleopatra.

1. A British pop group
2. A Canadian singer
3. A Greek singer

1) The most well-known is a UK girl group consisting of sisters Cleopatra, Zainam and Yoneh Higgins.

The first time the girls stepped on stage they were known as Cleopatra And The Attractions; at that point Cleo was the lead singer and her sisters were backing singers/dancers. They later dropped that name and became known as the band Cleopatra.

Their debut single was 'Cleopatra's Theme', which was taken from their debut album 'Comin' Atcha!', and shot straight in at #3 giving the girls their first top 5 hit in the UK's official top 40 singles charts.


The next 3 singles 'Life Ain't Easy', 'I Wan't You Back' and 'Thank Abba For The Music' all followed the same success heading into the top 5 gaining the girls BRIT Awards and MOBO Awards nominations. The girls performed at the 1999 BRIT Awards along side STEPS, Tina Cousins, B*Witched and Billie Piper and were also nominated for 'Best British Newcomer'. Madonna signed Cleopatra to her Maverick label and introduced them to America on the Nickelodeon's 11th Annual Kids' Choice Awards where they performed their U.S debut single 'Cleopatra's Theme'. This record was released shortly after gaining them a 26 position on the Billboard Charts and a 16 in the R&B charts. The video was a popular choice as it was #4 on the TRL top 10 countdown. Their U.S debut album Comin' Atcha sold over 300,000 copies.

Cleopatra were invited to perform at the Vatican for The pope John Paul II, backed by a 100-piece orchestra; Cleopatra stole the show. They covered the Bee Gees Song ("Gotta Get A Message To You") for the tribute album of the same name. They were also asked to record a cover of the disco song Right Back Where We Started From for An Extremely Goofy Movie by Disney.


Cleopatra moved onto their second album 'Steppin Out', working with legends Jam & Lewis Dallas Austin, Darryl Simmons, Cutfarther & Joe and Stargate. Steppin Out saw a mature, sexier side to Cleopatra as they revealed that they were no longer teeny boppers, they were now women.

They toured the U.S Promoting the leading U.S single off of 'Steppin Out', 'U Got It' The girls found themselves on 'The Tonight Show with Jay Leno' and 'The Queen Latifah Show' and as the new spokeswomen for Make-Up Giant Covergirl. The girls sang the theme tune for their new make-up line 'Triple Lipstick' and were featured in the U.S television advertisement, Making Cleopatra the first British female group to ever sign to Covergirl.

The girls toured the U.S with the likes of Brian Mcknight, Jessica Simpson, Next and Nelly. Cleopatra moved on to tour Japan and promote their Japanese single 'Yes, The Party's going right'. They were invited to perform a mini-concert for the Sultan of Brunei and his Royal family. Back home, on the other hand, things wasn't looking too good. With a massive wipeout including a change of M.D. at Warners led to lack of promotion of their U.K single 'Come and Get Me' which entered the top 40 at #29; the Steppin Out release date for the U.K was pushed back and the album was never released. Warner/Elektra/Atlantic had a meeting with Cleo as they now wanted her as a solo artist, because she had written and sung all of Cleopatra's hits; this led to the group's parting ways with Warner.


In 1998 CITV premiered Cleopatra's 1 hour Christmas Special for their brand new sitcom. With a host of stars to help launch the show it was a ratings smash. The show was 20 minutes per episode and followed the girls' lives on tour and at home with their family. The girls' mother and younger sister were featured as themselves. The show had two seasons: Season 1 'Comin' Atcha' and Season 2 'In The House' and was shown in numerous countries. Both seasons were number one in their time slots.


Cleopatra were known for their bright funky clothing and in December 1998 Cleopatra was signed up to Littlewoods for their own clothing range. The clothes could be bought in store and in the Littlewoods catalogue.


Cleopatra are the first Black British band to have ever featured in their own Covergirl advertisement. They sang and featured in the huge Covergirl campaign across America promoting their 'Triple Lipstick' line. It was filmed on Miami's South Beach in 2000 and saw the girls on stage performing the theme song.


In 2005 the girls came together for a one off performance on ITV1's Hit Me Baby One More time. Cleo currently is signed and is set to release a new single in 2007


2) An artist from Canada. More information can be found at
isiset.com/cleopatraqueenofthenile/Default.htm

3) Cleopatra Pantazi (Kleop?tra; Greek: ?????????), is a Greek singer. She is known for having represented Greece in the Eurovision Song Contest 1992, in Sweden. The musician Christos Lagos composed for her the song "Olou Tou Kosmou I Elpida" (Everyone's Hope). Cleopatra scored 94 points and reached the 5th place.