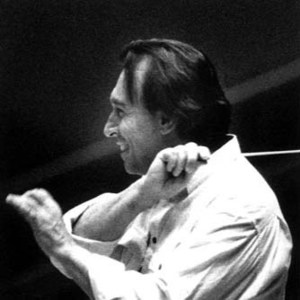 The outstanding Italian conductor Claudio Abbado studied the piano at the Milan Conservatory with his father Michelangelo Abbado, and went on to study conducting with Hans Swarowsky at the Vienna Academy of Music. He won the 1958 Koussevitsky Competition, establishing him in Italy, and then won the 1963 Mitropoulos Prize, after which he rapidly became known internationally as an orchestral and opera conductor.

Abbado first conducted the Berlin Philharmonic in 1966, and an important artistic relationship began which resulted in the orchestra electing him their Principal Conductor and their fifth Artistic Advisor in 1989. Under Abbado, in each season contemporary music takes its place alongside the classical and romantic repertoire, and each season also features a cycle of concerts dedicated to a particular theme: music inspired by the poetry of Holderlin; the legend of Faust; works centred around Greek drama, and so on.

Claudio Abbado made his debut at La Scala in his native Milan in 1960 and served as music director there from 1968 to 1986, conducting not only the traditional Italian repertoire but also presenting a contemporary opera each year, as well as a concert series devoted to the works of Alban Berg and Modest Mussorgsky. While at La Scala, Abbado also founded the Orchestra della Scala, for the performance of orchestral repertoire in concert.

In 1965 he appeared for the first time with the Vienna Philharmonic Orchestra in a concert at the Salzburg Festival, and made his Viennese debut two years later in the orchestra's subscription concert series. Claudio Abbado served as Music Director of the Vienna State Opera from 1986 to 1991, where he enriched the repertoire with premiere productions of Mussorgsky's original Boris Godunov and Khovanshchina, Schubert's Fierrabras and Rossini's Il viaggio a Reims. In 1987 he was named General Music Director of the City of Vienna, and in 1988 he founded the music festival Wien Modern, which has since expanded to include all aspects of contemporary art. This interdisciplinary festival takes place each year under Abbado's direction.

As founder and music director of the European Union Youth Orchestra (1978) and the Gustav Mahler Jugend Orchestra (1986), Abbado has also shown deep commitment to the development of young musicians, an interest which extends to his role as Artistic Advisor to the Chamber Orchestra of Europe. In 1992, together with cellist Natalia Gutman, he created Berliner Begegnungen (Encounters in Berlin), an annual gathering during the Berlin Festival in which experienced professional musicians join together to rehearse and perform with talented young instrumentalists in concerts of classical and contemporary chamber music.

Abbado also strives to encourage and support young composers. At his initiative, an annual international composers competition has taken place each year in Vienna, and since 1994 prizes for composition for the figurative arts and for literature are awarded by the Salzburg Easter Festival, of which Abbado became Artistic Director in 1994.

Among the numerous awards and honours Claudio Abbado has received are the Evening Standard Opera Award for his Boris Godunov at Covent Garden; the Legion d'Honneur from the French Ministry of Culture; the Gran Croce, the highest honour of Italy, and the highest civilian honour of Germany, the Bundesverdienstkreuz (1992). The Vienna Philharmonic awarded him their Ring of Honour in 1973, and the Golden Nicolai Medal in 1980. In 1985 he was awarded the Gold Medal by the International Gustav Mahler Society, presented in recognition of his service to the music of Gustav Mahler. He is an honorary member of the Gesellschaft der Musikfreunde in Vienna and has received honorary degrees from the universities of Cambridge, Aberdeen and Ferrara. In 1994 Claudio Abbado was awarded the International Ernst von Siemens Music Prize, Germany's most prestigious music award.