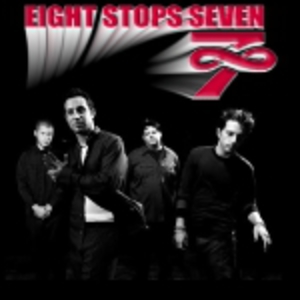 8 STOPS 7, a Ventura, California-based band, was formed in 1997 by singer Evan Sula-Goff, guitarist Seth Watson, bassist Alex Viveros, and percussionist Adam Powell. The band later blended guitarist Aaron Johnson and bassist Paul Wickstrom into their current line-up replacing Watson and Viveros respectively. All of the members feed off of each others intense creative abilities and work hard at structuring songs that tend to bleed through several different genres at once, reaching an even larger audience.

Whether its a loud-rocking anthem or a sensitive ballad, these young men make sure each song incorporates textured melodies, progressive grooves, and a universal meaning. Powerful vocals, innovative guitar riffs, and an over-the-top rhythm section have created songs that have already influenced hundreds of thousands of die-hard fans worldwide.

With their first major label release of In Moderation on Reprise Records in 1999, 8 STOPS 7 sold more than 150,000 copies, produced two full length videos, performed at multiple venues in excess of 15,000 fans with their explosive stage show, and charted in the Billboard top 20 with 2 different singles in late 2000 through 2001. The song "Question Everything" was included as a demo for the new digital speakers included with the Apple PowerMac G4 Cube. Their singles and videos continue to receive airplay to this day and album sales remain steady in their corner markets throughout the South and Midwest. Radio station representatives from New York to Los Angeles have supported 8 STOPS 7 with great fervor and are anticipating the follow-up to In Moderation, much of which has already been tracked. Their vast fan-base is starving for new material, constantly questioning websites, radio stations, and contacts about future release dates and tour schedules. 8 STOPS 7s only answer is soon.

Determined to give their loyal fans what they want and to make an even larger name for themselves in the music industry, this cutting-edge rock group looks forward to what awaits them in the future. The same drive and passion for their art form that allowed this success to happen has grown, fueling a fire that now burns hotter than ever, a fire thatll spread rampant across the nation. So keep your eyes and ears open and watch as 8 STOPS 7 explodes across the airwaves.

Birth Of A Cynic