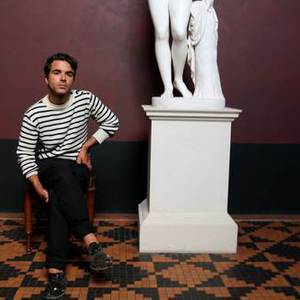 Choir Of Young Believers is band from Copenhagen, Denmark. The man behind this band is the 24 year old, Danish, Greek and Indonesian Jannis Noya Makrigiannis. For many years, Jannis has moved in the underground circles of the Danish indie scene and been a part of the legendary band, Lake Placid. Since 2006 he has been working on his solo material, which has now resulted in the debut EP from Choir Of Young believers, called Burn The Flag.

The songs for the EP were written in Berlin, Copenhagen and in a small town on the Greek island Samos, where Jannis lived for a while. The acoustic demos has then been evolved and arranged with producer Anders Rhedin, who has played a big part in creating the unique sound on the EP. Musically, Choir Of Young Believers is located somewhere between low key folk and grandiose indie pop, ambitiously combining a cool Nordic distance with a true presence and vitality.

In spite of his young age, Jannis writes mature intelligent songs. The melodies are simple and beautiful while the arrangements surprises and overwhelms the listener. There are references to Roy Orbinson, The Beach Boys, Pixies and Hank Williams, but Choir Of Young Believers stands out as a bright example of alternative pop music with depth and quality.

Live, Choir of Young believers can take many different shapes and sizes. Sometimes it is a solo performance with guitar or piano and other times you will see up to eight people on stage, including strings and percussion. You never know what you will get, apart from the beautiful voice and cool presence that Jannis always delivers.

Choir Of Young Believers is signed to Danish label Tigerspring, who in May 2007 released Burn The Flag nationally, to great reviews. The EP went straight to nr. 4 on the single chart in Denmark. The single Sharpen Your Knife was pick of the week on the biggest national radio station and also spent a maximum eight weeks at no. 1 of the national indie chart. Choir Of Young Believers performed at Roskilde Festival, before going on a national tour in the fall of 2007. In early 2008 COYB won two major awards in Denmark as ?talent of the year? and ?hope of the year? and they released their first full length album, This Is For The White In Your Eyes later that year.

This Is For The White In Your Eyes