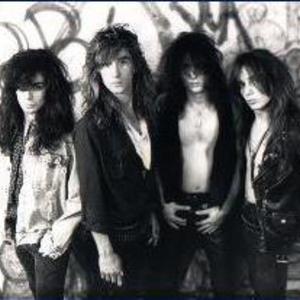 Child's Play were a sleaze band that got lumped in with the whole make-up and hairspray genre, despite being much more blue collar and in tune with their southern blues roots. Nicky Kay (guitar), Idzi (bass) and John Allen (drums) formed the group in Baltimore, Maryland. With the addition of vocalist/guitarist Brian Jack, the band started to gain a large following on the east coast. In 1989 Child's Play finally got the break they were looking for when they signed to Chrysalis records.

The debut got limited airtime behind singles such as the title track, "Day After Night" and "Wind". But their dream was short lived as Jack left the band in 1991 to pursue a solo career.
A revamped Child's Play with vocalist Ty Crook emerged, but it would be Tommy McRae handling the vocal duties on the bands final independent release, Long Way. Occasionally the original lineup reforms for one off gigs, but a full-blown reunion seems unlikely. Idzi and Allen would both appear in the much smaller scale Starseed Speed and UXB and Allen later joined SR-71.