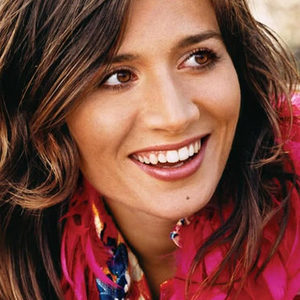 ?Songs are like trains; they take you from one place to another. This collection of songs, I think, is my train home,? says Chiara Civello, in describing her second album, The Space Between. Sultry voice, poetic lyrics and surprising harmonies are just a part of the recipe that makes Chiara's music so irresistible. The distance she has traveled is both musical and spiritual-literally stretching across the Atlantic Ocean. Born in Rome, Chiara was encouraged to play the piano by her grandmother; she kids that her nonna's out-of-tune upright afforded the best ear training.

Sultry voice, poetic lyrics and surprising harmonies are just a part of the recipe that makes Chiara's music so irresistible.

The distance she has traveled is both musical and spiritual-literally stretching across the Atlantic Ocean. Born in Rome, Chiara was encouraged to play the piano by her grandmother; she kids that her nonna's out-of-tune upright afforded the best ear training. She briefly tried the acoustic guitar, but that ended almost comically with a drive to get some gelato. "The little car only had two doors," she remembers. "When I sat down, I broke the neck of the guitar. That was it for me. No more guitar. My mother said, 'You'd better sing, girl!'"

Chiara had already been in some classical choirs, but was looking for something freer than the operatic traditions of her homeland. A friend suggested that she learn jazz; she'd never heard of it. A little investigation brought her to a private music school that she would attend through her four years of high school: the St. Louis Music Academy in Rome. When she was sixteen, Chiara began singing professionally and won a scholarship to the prestigious Berklee College of Music in Boston. She enrolled there from 1994-98. By the first year Chiara was a regular on the Boston club scene, performing with different bands.

But her journey didn't end with Boston or jazz. Chiara's move to New York City was inevitable. Searching for something musically closer to her Mediterranean roots, she immersed herself in Latin and Brazilian music, learning Spanish and Portuguese along the way. She also wrote her first song, "Parole Incerte" ("Uncertain Words"), about the misunderstandings that can come from the distance between a person and her loved ones.

Meanwhile, two of Chiara's bandmates - pianist Alain Mallet and drummer Jamey Haddad - had begun working with Paul Simon and invited her to a rehearsal. It was there that she met producer Russ Titelman and left him with a demo of "Parole Incerte." He called the very next day and insisted, "You are a songwriter. Forget about everything else you are doing. You have to write." Chiara began composing lyrics in English. She studied the work of Bob Dylan, Joni Mitchell, James Taylor.

Titelman let president and CEO of Verve hear the song and the next day Chiara was offered a record deal that not only allowed her to enter the studio but made her the first Italian born to be signed by Verve Records.

From this series of encouraging and exciting encounters emerged the 10 original compositions included on her debut album LAST QUARTER MOON, Verve2005; seven written by herself and three co-writes, including the brooding ballad "Trouble" that was co-written with legend Burt Bacharach. "I had almost every song on the album," recalls Chiara, "when Russ called me to say that Burt Bacharach was interested in writing with me." "Trouble" came together during a three day session at Bacharach's Los Angeles home. Chiara arrived with an idea for the melody; they shaped and refined it as a team.

The first album granted her a first round of the world and great position in the charts of italy and Japan.
Billboard Magazine noted that, ?the beauty, charm and allure of singer/pianist/songwriter Chiara Civello's debut?makes for an auspicious beginning and marks the first revelation of the New Year.? The International Herald Tribune declared ?her combination of personality, soulfulness and sophistication?striking.?

Definitely an itinerant soul, Chiara describes her life as:? My home is the world, as long as there's a piano at the destination, my world fits in a suitcase, the rest I carry with me : my computer and my guitar.
"Jazz was the most incredible diving machine when it came to going really deep into music," says Civello, about her path of discovery, one sure to continue in the future. "But I knew I couldn't be the new Ella Fitzgerald; I couldn't be the new Shirley Horn. I learned all different kinds of music and then I said to myself, 'I need to find my own voice. Time to unlearn now, time to be free.' It's like a hot air balloon: To be able to fly you have to throw off the sandbags. I want to be as light as I can-light as a feather."

?In the first album you search, in the second you focus, in the third you find yourself?. and here I am,? says Chiara Civello in describing her third album titled ?7752? of upcoming release.

7752 is the distance in Kilometers from New York City to Rio de Janeiro, the two cities that provided the inspiration for this album. New York is where Chiara lives, while Rio changed Chiara's life?

While visiting her friend, Daniel Jobim, in Rio in February 2008, Chiara was taken to a party (known as SARAO) where artists and musicians of all kinds get together. The guitar went around and everyone sang a song. As Chiara shared, listened, and learned, a new phase of her artistic path began.

?Co-writing I was already familiar with,? says Chiara, ?since those unforgettable three days spent in Santa Monica in which I wrote Trouble with Burt Bacharach for my first album?but in Brazil everyone co writes. It's a big party, everyone shares and dares and makes it happen.?

Ana Carolina, a Brazilian pop star, is one of the main collaborators of 7752. Not only did she co-write five of the songs with Chiara, but she also played acoustic guitar on most of them. ?We met at that party and she asked me if I had a melody for her, so the next day I started RESTA, a song that soon after we finished together and sang as a duet live in Sao Paulo.? Success has already accompanied the collaboration with Ana Carolina, as RESTA will be featured on the new Novela of Globo TV called ?Passione,? starting on May 17, 2010.

?All my friends and favorite musicians merged into this record in the most natural way?it was like bringing the Rio spirit into the studio: Mauro Refosco (Thom Yorke, David Byrne, Forro' in The Dark) and Guilherme Monteiro (Ron Carter, Forro in The Dark) had already recorded with me and I couldn't possibly think of a record without them, Anat Cohen is one of my best friends and I have always wanted to have her on my album but we never were able to make it happen; Jaques Morelenbaum is one of the most talented and sentimental musicians I have ever met; Mark Ribot was the perfect guy for these songs, not to mention the great rhythm section that Andres brought in the studio, Gene Lake on the drums and Jonathan Maron on the bass. Ana Carolina who wrote most of the songs with me already owned them on the acoustic guitar and added her tremendous groove to them?.

Already defined as an ?enticing and contagious? album, 7752 sounds lively, while portraying a new, playful and joyous aspect of Chiara's singing and songwriting. The sound is a beautiful alchemy among the 60s, Italian melody, Brazilian harmonies, and R&B.