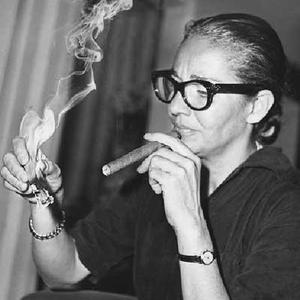 Isabel Vargas Lizano (born 17 April 1919, died August 5, 2012) was a Costa Rican-born Mexican singer. She is especially known for her rendition of Mexican rancheras genre - a folkloric musical genre widely popular in Mexico - but she is also recognized for her contribution to other popular Latin American song genres. She has been an influential interpreter in the Americas and Europe, muse to figures such as Pedro Almod?var, hailed for her haunting performances, and called "la voz ?spera de la ternura", the rough voice of tenderness.

Isabel Vargas Lizano was born in San Joaqu?n de Flores, Costa Rica. She goes by Chavela, which is a nickname for Isabel. At only 14, she fled her native country due to lack of musical career opportunities, seeking refuge in Mexico, where an entertainment industry was burgeoning. For many years she sang on the streets but in her thirties she became a professional singer. In her youth, she dressed as a man, smoked cigars, drank heavily, carried a gun and was known for her characteristic red jorongo, which she still dons in performances.

Her first album, Noche de Bohemia (Bohemian Night), was released in 1961 with the professional support of Jos&eacute; Alfredo Jim&eacute;nez, one of the foremost singer/songwriters of the Mexican cancion ranchera. Vargas has recorded over eighty albums thereafter. She was hugely successful during the 1950s, 1960s and the first half of the 70s, touring in Mexico, the United States, France and Spain and was close to many prominent artists and intellectuals of the time, including Juan Rulfo, Agust?n Lara, Frida Kahlo, Diego Rivera, Dolores Olmedo and Jos? Alfredo Jim?nez. She partly retired in the late 1970s due to a 15 year-long battle with alcoholism, which she has described in her autobiography (Y si quieres saber de mi pasado [And if you want to know about my past], published in 2002) as "my 15 years in hell" At 81 years old, she publicly declared that she was a lesbian.

Vargas returned to the stage in 1991, performing at the venue "El Habito" in Coyoacan, Mexico City.She debuted at Carnegie Hall in 2003 at the age of 83 at the behest and promotion of Spanish director Pedro Almod?var, a long-time admirer and personal friend of Vargas.