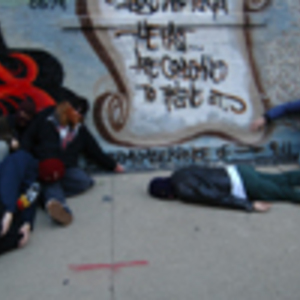 Chicago's 7000 Dying Rats have been around in one form or another since 1992, playing a style they refer to as straight-up comedy grind. Considering how many different people have played in the Rats and appeared on their recordings (30 would be a conservative estimate), it is probably more fitting to classify them as a "collective" than an actual band. As vocalist/multi-instrumentalist Toney Vast-Binder described it...

As vocalist/multi-instrumentalist Toney Vast-Binder described it, "The lineup seems to be dictated by who ever we happen to be drinking with at the time," as of 7000 Dying Rats' 2001 release, The Sound of No Hands Clapping, the only original member still with the band was vocalist Josh Diebel. Despite the lineup changes, they have managed over the years to establish something of a cult following, among whom they have become almost as noted for their tasteless sense of humor and ridiculous song titles (e.g., My Nordic Butt can Rule Nations, Cocaine Keeps Me Thin and Sexy) as for their music.

Their first official release of their own (following two demos and a split 7" appearance) was a self-titled, triple-7" boxed set on Stomach Ache Records, which contained the above-mentioned demos along with some other material. They have also made their way onto a number of compilations, including the somewhat infamous 500 Locked Grooves LP on RRR (1999), as well as a 1995 tribute to industrial/noise pioneers Throbbing Gristle, entitled Entertainment Through Pain (also on RRR), which found them appearing alongside Merzbow and Skullflower, among others. Album-wise, however, 7000 Dying Rats have not been terribly prolific over the years: their first full-length, Fanning the Flames of Fire, didn't come out until 1998, and The Sound... was just their second long-player.

Fanning The Flames Of Fire