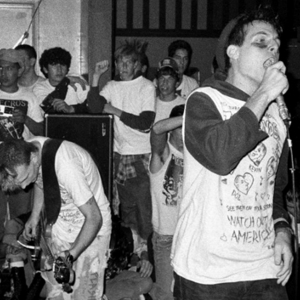 7 Seconds is an American hardcore punk band from Reno, Nevada. Formed on January 17, 1980 by two sets of brothers Kevin Seconds and Steve Youth in combination with the Borghino brothers Tom Munist and Dim Menace. These original member all shared vocals but Tom Munist. The Band has gone through various members but Kevin Seconds and Steve Youth have stayed on as the core. Notably in 1981 the Brothers Tom and Dim left to form Section 8.

7 Seconds is one of the longest standing bands in Punk Music they have been touring and recording for three decades.

Because of the positive message in their music they are constantly being categorized as a Straight Edge Band. The band has continually rejected this label.

The band started by releasing some poorly-recorded, but highly energetic, EPs, most of which were later re-released as "alt.music.hardcore" and "Old School" compilation CDs. They also appeared on the 1985 hardcore compilation "Cleanse the Bacteria", in addition to numerous other compilations, such as "Not So Quiet On the Western Front," "Something to Believe In," and "Another Shot from Bracken."

7 Seconds has floated across several genres of rock. Their first full-length LP "The Crew" was recorded in 1983 and released by BYO Records, as was its successor - the classic hardcore EP "Walk Together Rock Together". With the "New Wind" LP, the band dramatically expanded its sound and style with audible elements of a sometimes quieter, more melodic and accessible sound. Many writers have credited this particular period of 7 Seconds' career as being highly influential on many pop punk, emocore and indie rock bands that came along much later. Subsequent LPs moved deeper into mainstream territory with proto-emo and U2-like sounds. The "7 Seconds" LP continued their musical experimentation. However, the band returned to an old-school hardcore sound in 1999 with the "Good to Go" album.

They are currently touring and plan to re-record their first three tapes Drastic Measures, Socially Fucked Up, Three Chord Politics, onto CD.

In the February, 2005 issue of AMP magazine, in an article titled, "7 Seconds: 25 Years of Our Core," Kevin Seconds explained how the band's name originated:

?We were big fans of The Dils, they had this EP, 198 Seconds of The Dils and I was so in love with punk rock that I would just write album titles on my clothes. This was still when Steve and I lived with my mom. We had this desk in this room we shared and I wrote ?197 seconds of The Dils', I miswrote the title. Over time, everything else faded, but the 7 Seconds part was there, and I circled it, I thought it looked cool.?


In 1982 7 Seconds is believed to be the first band to refer to themselves as Hardcore. For their first show on March 2 in Newsletter NWIN/SPUNK #1 they described their band as hardcore new wave [1]

Dim Menace's fist-brandishing scowl on the cover of the Skins, Brains, & Guts EP is one of the most iconic images in punk rock.[2]

Sacramento News & Review [3] speaks at length of their influence in the positive hardcore movement and their positive effect on the Punk Culture.

Leave A Light On

The Music, The Message