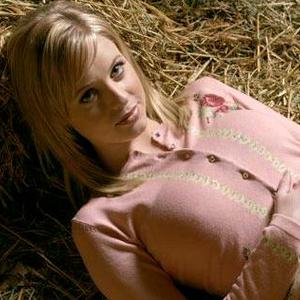 Carmen Rasmusen (born March 25, 1985 in Edmonton, Alberta) is a Canadian-American singer and was a singing hopeful who ranked sixth on the second season of American Idol in 2003. Rasmusen was praised by her fans as having a wholesome, girlish appeal and for refusing to wear outfits she and her mother deemed "immodest" on stage. Her critics, however, were more vocal. In her performances, Rasmusen often had trouble controlling her natural vibrato. Judge Randy Jackson was often one of her harshest detractors.

Rasmusen was praised by her fans as having a wholesome, girlish appeal and for refusing to wear outfits she and her mother deemed "immodest" on stage. Her critics, however, were more vocal. In her performances, Rasmusen often had trouble controlling her natural vibrato. Judge Randy Jackson was often one of her harshest detractors.

Her fans, however, enjoyed her unique voice, including the vibrato. The general consensus was that her first four performances on the finals, including "You Can't Hurry Love," "Hopelessly Devoted to You," "Wild Angels," and "Turn the Beat Around" were quite good, while the remaining three, "Call Me," "And So It Goes," and "Love Will Lead You Back" were subpar.

As the only contestant in the second season under the age of eighteen, she had to spend three hours a day with an on-set tutor. Her mother had to accompany her with the other contestants to the special American Idol house, where they all lived during the competition. Carmen was brought back for the wildcard round (along with three other singers) without having competed in the previous rounds of 8. Judge Simon Cowell made her his surprise wildcard pick.

A member of The Church of Jesus Christ of Latter-day Saints, Rasmusen attended Brigham Young University for one year. She now spends much time in Nashville trying to establish a career in country music. She has been one of the most outspoken defenders of the show among the second season finalists in the wake of the scandal involving Corey Clark's allegations regarding Paula Abdul.

After her elimination she went on to appear in numerous shows promoting American Idol and she appeared on the last episode of the second season singing some songs with the another finalists. Rasmusen also appeared on the American Idol Season 2: All-Time Classic American Love Songs singing "How Do I Live" by LeAnn Rimes.

Rasmusen made her acting debut in 2003 in the feature film Pride and Prejudice: A Latter-Day Comedy as Charlotte Lucas.[1] In 2004, Carmen released an EP by R3 Records, Carmen.

On December 15 2005, Carmen married Bradley Herbert, the son of Utah Lt. Governor, Gary R. Herbert in Bountiful, Utah. Their marriage was announced on FOX 13 News in Salt Lake City, Utah. Rasmusen also appeared in a three episode series of NBC's Fear Factor, aired on June 13, 2006 to 27th, 2006 respectively. In the first episode, she was teamed with Anthony Fedorov, and won the first challenge involving a demolition derby, ultimately winning a trip to Africa. She finished in second place.

In June of 2006, Carmen played a news reporter in commercials for Maverik, a convenience store in the western USA.

In February, 2007, it was announced that Carmen signed with Lofton Creek Records.

Rasmusen is signed with Lofton Creek Records. Her debut album, Nothin' Like the Summer was released on August 28, 2007, and the first single, "Nothin' Like the Summer", debuted on April 24, 2007. The song was written by Rasmusen, Victoria Shaw and Jason Deere who also produced the song and her album.

Rasmusen is not only out doing the radio tour set up by Mike Borchetta of Lofton Creek Records, she also started a new program called ?Hitching a Ride? where fans can hitch a ride and hang on the bus for a while. This is being done through the local radio stations.

Rasmusen also stopped at 30 radio stations and 10 Television shows including Fox, MSNBC, and Geraldo on Fox News Channel. She has done two live performances one which she opened for Tracy Byrd and Jason Michael Carroll.

On July 10, 2007, Rasmusen went to Today to talk about her career and her future plans.