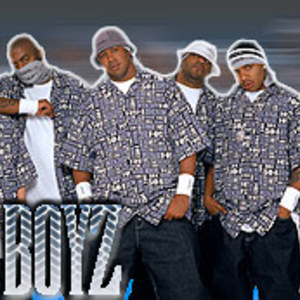 504 Boyz is a hip hop group led by Percy Miller, aka Master P. Originally the group consisted of Master P and C-Murder (under the aliases Nino Brown and G. Money, respectively). Right before the release of their first album Silkk The Shocker was added to the lineup under the alias "Vito". This lineup was intact on their debut, 'Goodfellas' which contained the hit 'Wobble Wobble', which peaked at #17 in the U.S.

After No Limit Records reorganization into Gutta Music, new members including Lil' Romeo, Krazy, Magic, Choppa, Currency, Mac, and T-bo joined the group. This line up appears on their second album, Ballers, which includes the hit Tight Whips. After Hurricane Katrina hit New Orleans in 2005, 504 Boyz released their third studio album, We Gon Bounce Back.

504 is the area code for New Orleans.