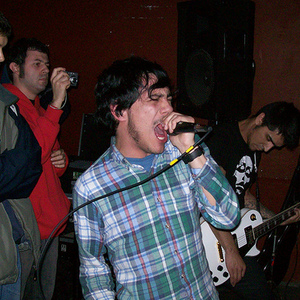 There are four bands using the name Canvas. 1). Canvas began in fledgling form some 7 years ago in San Francisco as the brainchild of singer-songwriter Joseph King. After a couple of years of touring the West Coast Joseph and friends chose to break out of the West Coast circuit and move to the vibrant bohemian music scene in Austin, Texas. Shortly after moving to Austin in 1999, King augmented his line-up with established Austin musicians: Scott Thomas on drums, Julian Mandrake on guitar, and Brad Byram on bass and backing vocals.

1). Canvas began in fledgling form some 7 years ago in San Francisco as the brainchild of singer-songwriter Joseph King. After a couple of years of touring the West Coast Joseph and friends chose to break out of the West Coast circuit and move to the vibrant bohemian music scene in Austin, Texas. Shortly after moving to Austin in 1999, King augmented his line-up with established Austin musicians: Scott Thomas on drums, Julian Mandrake on guitar, and Brad Byram on bass and backing vocals. Close to a year after their inception the band wrote and recorded their first album, ?Invocation?, which they recorded in the band's garage. With a rigorous touring schedule throughout the Texas region they earned a rabid cult following and sold over 2,000 copies of their first endeavor. In 2002 they entered the studio to record their second album, ?Four Days Awake?, with veteran producer Stuart Sullivan (Sublime, the Butthole Surfers, Meat Puppets). Upon completion of the record they toured Texas as well as the Midwest and South, expanding their audiences almost exponentially.

While touring in support of ?Four Days Awake? Joseph spent much of his off time playing solo acoustic shows and honing his songwriting skills. He surrounded himself with highly respected veteran Austin artists such as David Garza, Johnny Goudie and Justin Furstenfeld, and began focusing on a direction for a new record and sound. By the summer of 2004, the band found themselves with an album's worth of the strongest songs they had created to date. In December of 2004 they entered the studio with a new vision and confidence to make their third album, ?Painting The Roses?, this time enlisting fellow songwriter/musician and close friend Johnny Goudie as producer.

"Painting The Roses" is a departure from previous sounds and promises to invite a new sphere of music fans into the already vibrant scene Canvas has developed. The sound of ?Roses? seems to be more focused and mature, demonstrating a deep continuity in songwriting, instrumentation and vibe. The textural content of the album, influenced strongly by Goudie's involvement, features an array of warm sounds ranging from Rhodes piano to omnichord, slide guitar to ultra dry, in?your-ear vocal performances. The musicianship of Thomas, Byram and Mandrake is superbly creative, providing a rich rock and roll palate for King's diverse lyrical indulgences. ?She says the writing's on the wall/ She makes a space for you to crawl/ Hotel room she's on the floor/ She waits for you to lock the door? is the opening line of the first track on the album, ?Pretty Please?, written over a moody drum loop and simple slide guitar melody that gives way to an unabashed rock song. This is followed by a break beat remix of old Canvas favorite ?Come Down?, and then the tragically reflective ?Priscilla Is Sleeping?, which is set to a anthemic rock tune reminiscent of late U2. A gritty cover of the Morphine song ?Thursday? marks the middle of the album, while the haunting ?Lullaby? personifies the darker, groovier mood of the later part of ?Roses?. Songs such as the Britpop anthem "Daylight Resolution", the Beatles-meets-spaghetti western "Melancholy Lover", and the catholic confessional ?And What's For Sure? are glimpses into the direction and breadth of the new record, which was released in mid-May of 2005.

The band has three albums to date, Invocation, Four Days Awake, and Painting the Roses, but are currently on haitus while singer Joseph King pursues a solo career in New York.

2). Canvas is also an american progressive rock band consistingly mainly of multi-instrumentalists Matt Sweitzer and Chris Cobel. Their album Avenues combines elements from said genre, as well as mainstream rock and folk. The two-CD set also makes use of a number of vocalists.

3). Canvas was also a band from Leeds, England who blended metal and hardcore with a heavy dose of atmosphere. Their first full-length, self-titled, was a collection of sorts. It was followed up with the much more experimental Lost In Rock, before the band split up.

4).Hailing from Bedfordshire England, CANVAS play their own unique brand of ambient hardcore. renound for their explosive and emotional live performance creating an intense atmosphere in any venue.

Canvas' debut EP 'Take Heart' & their music video for the single ?Fragile Hearts' instantly turned heads of fans and industry personnel alike and subsequently has led to them having a relentless touring schedule for the remainder of 2012, and no doubt beyond!

With already having such a successful year, there is no doubt that Canvas have a bright future. Check their tour dates and be sure not to miss out. You would be a fool not to.

Download their debut EP Take Heart for free at - http://wearecanvasuk.bandcamp.com/