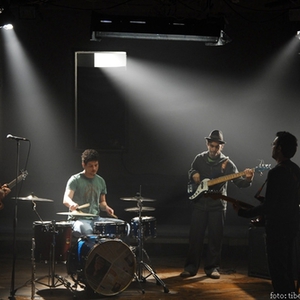 jacob glick came in to fulfill bass duties in the band.

In this line-up, on April 3rd, 2008, the band played an unplugged gig at Teatru 74, in the medieval city of T?rgu Mure?. The concert was recorded and later released under the MTV Unplugged brand as Acoustic Drama, the first unplugged DVD ever released by a Romanian band. With special guests such as Alexandru Andrie? and Paula Seling, the concert mainly featured songs from the debut, specially arranged for a completely acoustic experience (seven different guitars, banjo, mandolin, cajon, upright bass, acoustic bass, a string quartet, a piano and all sorts of percussion), with no later overdubs in the studio. Additionally, each of the two guests brought a song of their own, and two other brand new songs were also included in the set.
Since fall 2008 and the subsequent Acoustic Drama national tour, the band welcomed Vladimir S?teanu as the new bass player, a craftsman in his own right.

After more touring, a series of special concerts (a two evening gig with an electrical vs. unplugged approach of the same set, an outdoor unplugged session or a live preview of their second studio release to name a few) and an unconventional promotion strategy, the band released their awaited sophomore album, A Kind of Alchemy, in fall 2009. The release marks an evolution in the band's sound, with blues, progressive and funk influences, employing a wider diversity of instruments. In frontman Dan Byron's words, "The mood is nocturnal, rather intimate, sometimes playful or even exuberant", and the album as a whole deals with "the process of creation, ranging from madness to zen".
In spring 2010, the band chooses to release digital versions of their two studio albums under a Creative Commons BY-NC-ND license, encouraging listeners to download and share their music free of charge.
Since summer 2010, the band has a new bass player, Dan Georgescu as well as a new drummer, Marcel Moldovan.

February 2011 saw the release of a special project: Perfect, their first album with Romanian lyrics, featuring well known songs by established Romanian artists which were re-arranged and re-interpreted in their own style. The music itself is very eclectic, ranging from alternative rock to jazz, swing and even trip-hop, and the guest list is huge (Nicu Alifantis, Alexandru Andrie?, Virgil Ian?u, film director Nae Caranfil and many others).


In November 2010 theye held a couple of special performances (unplugged & electric) in the Turda salt mine in Transylvania, more than 300 feet underground. The resulting material, "Live Underground", was partly shown on HBO Romania. It has been fully released on DVD & Blu-Ray in spring 2012, together with a documentary, a series of interviews and making-of features.

In 2012, Dan Georgescu became the band's drummer and Laszlo Demeter, aka absurdcus, became their bass player.


The album releases are available for full audio streaming on the band's official website, www.byronmusic.ro.

2. Byron - Romanian progressive metal active between 1997 and 1999, when they split up after almost 60 gigs and a few TV appearances. The band members were Daniel Radu "Byron", vocals (who later joined the bands Kumm and Urma, now member of another project also entitled Byron - see above), Felix Barca, guitars, Ciprian Macavei, bass, and Cristi Raducanu, drums, all three active in the defunct Sahara. Presently, Felix and Cristi play with Stonebox.

3. Byron - Formed in 2007, Byron is the solo work of Scott White. Previously from a metal/hardcore background, he began writing music of a contrasting nature following the split of his previous band, Awoken. This year will hopefully see a self-released EP. Byron has now become lakklust

A Kind Of Alchemy