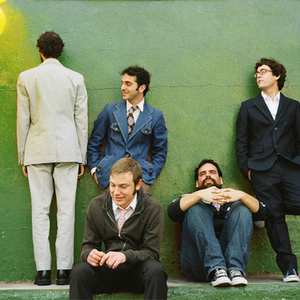 Buddy sees himself as a pretty happy guy. That light-hearted quality shines through in his live show and in his wonderfully dark cover of the popular Kelis song Milkshake found on his new EP, entitled "Buddy". Rest assured, there is much more to Buddy underneath the silky covers... Hailing from Portland, Oregon, Buddy began feeding his love for music at an early age. At 10 he was begging his mom and dad for a guitar and by 16, had formed his first REM- inspired band.

Hailing from Portland, Oregon, Buddy began feeding his love for music at an early age. At 10 he was begging his mom and dad for a guitar and by 16, had formed his first REM- inspired band.

Buddy left Portland to attend college at Providence College in Rhode Island where he majored in English and struggled with a strong case of stage fright. After college he moved to Austin, Texas where his passion for music returned to the forefront of his life. Buddy joined up with a local band called Piltdowns and they gained a good following and supported bands like Spoon while fielding some local record label offers.

In 2002, Buddy relocated again, finally landing in Los Angeles, CA where he continued to hone his songwriting style. Not to be dissuaded by prior mishaps, Buddy hit the local stages again, performing his first show as Buddy at the Hotel Caf?, in July of 2004. It wasn't until Buddy hooked up with friend and author Greg Behrendt (He's Just Not That Into You) that things began to truly turn in Buddy's direction. While performing at one of Behrendt's infamous Bring the Rock musician/comedian nights, producer Robbie Rist (the Andersons) took an interest in Buddy's unique voice, beautiful lyrics and clever songwriting style. The two joined forces to produce and record Buddy's 1st EP, which was simply titled "Buddy". It hit the streets November 30th, 2004.

Shortly after finishing the EP, local DJ Tricia Halloran of the station KCRW in Santa Monica began playing a track called "Salt Point" on air. Random deal offers from the UK began to come in, but none of them seemed quite right, so Buddy kept on pushing his material and playing live shows. At that time a radio station in Denver caught wind of Buddys Milkshake cover, the word was out, and the word was "Buddy". Buddy's music has been featured on "All Things Considered", "One Tree Hill", "Ghost Whisperer", "Shelter from the Storm, Katrina Benefit" and recently the song Westgate.

Lyrics will always be Buddy's most important focus. Powerful stuff for a guy who describes himself as pretty much "always happy", but to that he adds, "if something is really bugging me, Ill carry it around for a long while. Then eventually, Ill sit down and in about 15 minutes, Ill have put it in a song" and the rest, is well safely tucked away beneath the sheets.

More of the Shame (single)