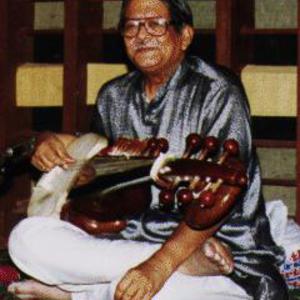 Rare, indeed, is the genius and artistry of this man who has, for almost six decades, single handedly represented the pedagogical lineage of the great masters Murad Ali Khan, Abdullah Khan, Mohammad Ameer Khan and Radhika Mohan Maitra of the well known Sarod Gharana of Senia Shahjahanpur. It is for his incomparable sacrifices for music and the sarod, and for his soulful mastery of the instrument, that Buddhadev Das Gupta is recognized worldwide as one of the finest masters of the classical musical tradition of North India and have made him one of the best known cultural ambassadors of India .

Having struck a perfect balance between gayaki and tantrakari, Pt. Das Gupta, through his thorough raga conception, pin pointed note accuracy, rabab based bol patterns and fluent ekhara taans, of which he is the pioneer, have added a new dimension to his parent style of playing the sarod. His extensive research work, eloquent lectures and lucid articles on various topics have been acclaimed by students, connoisseurs and lay listeners alike throughout the world.

A genius is born :

Buddhadev Das Gupta was born in Bhagalpur , Bihar , on 1 st February, 1933 . He cannot claim any glorious musical heritage - his grandfather, a hardboiled advocate was totally averse to music. Buddhadev's father, Shri Prafulla Mohan Das Gupta was however highly inclined to music but could not engage in any sort of musical activities because of his father's stern opposition. However, he was a fairly good amateur singer, and Buddhadev's mother as well took lessons in sitar playing for quite a few years. Being a government employee, Buddhadev's father was transferred from place to place, but wherever he went, he became a close friend of the local musicians and invited them to his home. In spite of the frequent musical soirees at home, Buddhadev did not have a very early stirring of music in him.

His first tryst with music was at the age of 3-1/2 years when he asked the great maestro Jnanendra Prasad Goswami (performing in Dinajpur in 1936) to "keep quiet" and not to make such "abysmal noise". The next milestone in his blistering track through music was when he was about five and at Barisal . He asked the flute maestro Pannalal Ghosh to give up one of his twelve flutes not because of having been enamored of flute or music but simply because Pannalal Babu had nearly a dozen flutes while he had none. He received the flute from Pannalal Babu and also a commensurate measure of hiding from his mother.
Thus his chidhood years trotted by and when he was about nine, his father was transferred to Rajshahi where they met the young charismatic Sarodiya Radhika Mohan Maitra. This time Buddhadev Das Gupta truly fell for the man, the music and the sarod and became a disciple of Pt. Maitra.
with Guru Radhika Mohan Maitra


A brilliant academic career followed by an exacting profession :

Buddhadev Das Gupta's tireless journey is etched in excellences from the very beginning. Having been born in a middle class family, it was imperative that Buddhadev should go for formal institutional education and ultimately head for a job. His schooling started at Maimanshingh, continued through different schools at Midnapore, Jhargram, Contai, Dinajpur, Rajshahi, Khulna and ultimately at Mitra Institution in Bhavanipore, Calcutta, from where he stood second in Matriculation Examination in 1948.
Maintaining an uniformly brilliant academic career, he studied ISC at Presidency college, Calcutta and stood second in Mechanical Engineering from Bengal Engineering College , Sibpur in 1954.
In those days , music as a profession did not promise a secure or solvent future. Therefore, after taking training in Calcutta Electric Supply Corporation (CESC) - in UK and India , Buddhadev had to go into an exacting profession of a power engineer. During his early career therein, there was a period of abour eight years during which there was no Saturdays, Sundays, or even holidays in his life. He had to work from morning till night having a quarter attached to the power station so that he could be on call round the clock. He worked as a Sr. Engineer, Trainer and Administrator with CESC for 32 years (1956 - 1988). Despite such a grind, his academic endeavours and professional engagements, he managed by dint of his firm resolve and dedication to pursue and preserve his passion - MUSIC, which he believed was the only medium capable of guiding mankind to live in harmony with self and nature.
Practising and sustaining music against such immense odds, it is highly improbable that any other musician could have attained such a glorious height that Buddhadev Das Gupta has achieved in the world of music. In all probability, any lesser musician would have disappeared totally from the musical scene.

Buddhadev took up his sarod training under the tutelage of Sarod Maestro, Pt. Radhika Mohan Maitra at the tender age of 10 and the Guru-Shishya relationship which was established lasted till Pt. Maitra's passing away on 15 th October. 1981.
Buddhadev's Gharana ( Musical Lineage) has been accepted as the foremost living representative of Ustad Murad Ali Khan. His music today is a synthesis of this Gharana interwined with the nuances of Rampur Seniya Gharana perfected by his Guru, Pt. Radhika Mohan Maitra.
Buddhadev's style, though firmly anchored in tradition, is unique in that it combines a cerebral approach to music with a keen aesthetic sense and a rare accuracy of notes. His imagination always stays linked to the time-honoured spirits of the melody and never deviates to the point of being an aimless collection of purple patches catering to the lighter tastes of the gallery. Like his illustrious Guru, he is a seeker of wonders and surprises within the boundaries of tradition. Having struck a perfect balance between gayaki and tantrakari, Buddhadev, through his thorough raga conception, pin pointed note accuracy, rabab based bol patterns and fluent ekhara taans, of which he is the pioneer, have added a new dimension to his parent style of playing the sarod.
He is a unique musical personality standing out in the vast crowd of Indian musicians for his distinctive way of musical thinking, and a style which is instantly recognisable as totally his own.

Receipient of a First Class First Gold medal in Sangeet Prabhakar (B. Mus.) and Sangeet Praveen (M.Mus.) examination of Prayag Sangeet Simiti, Buddhadev became an artist of All India Radio (AIR) in 1949, and made his mark as a young talent in various music competitions and conferences all over India . When he was in his twenties, he was fortunate to receive appreciation from great Ustads, Baba Allauddin Khan and Hafiz Ali Khan. He had also played for the BBC in 1958, when he was in England for power station training.
In 1961, he performed his first National Programme of All India Radio and since then he had been featured in AIR's National Programme and Sangeet Sammelans on more than twenty occasions.
Buddhadev has toured, performed and lectured in many parts of the world including all of Europe , the United States , Russia , Canada , Japan and Australia . He was, in fact, the first Indian sarod player to travel and perform abroad when he made his European debut in 1954.

His other Musical and Non Musical Activities :

In spite of being roofed in Indian Classical music, Buddhadev has a keen interest in other musical systems and forms (particularly Western Classical) and is a firm believer in "Universality of Music". From this stems his missionary zeal for various cross-disciplinary experimentations, two particular interesting examples being his raga based symphonic compositions and his strikingly original idea of deriving classical bandishes from Rabindrasangeet (Songs composed by Rabindranath Tagore).
A third and no less interesting example is his ceaseles quest for strikingly similar expressions in two entirely different musical systems totally uncorrelated in place and time. Based on this idea , he has delivered a number of illustrative lecture demonstrations in India and abroad, one memorable instance being his address from AIR on 1 st October, 1992 - World Music Day.
In addition to the peak performimg standard that he has attained, struggling against so many odds, he has carved out time enough to teach and rear up a number of disciples who are already well known in the country and abroad.

His remarkable oratory skills, eloquent lectures and lucid articles on various topics both music and non music have been acclaimed by students, connoisseurs and lay listeners alike and have made him so pupular throught the world.

An excellent and witty writer, his latest book release titled "Bamaner Chandrasparshabhilash" (A dwarf reaching out for the moon) in Bengali have become a bestseller.