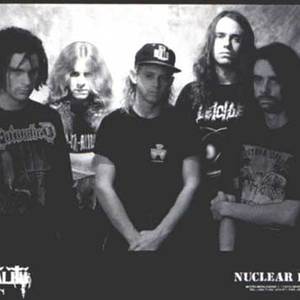 Brutality is a death metal band from Tampa, Florida, USA. The band was founded in 1986 as Abomination by Larry Sapp and Jeff Acres. The band quickly changed their name to Darkness and finally settled on Brutality in spring 1987. After several demos and line-up changes, the band got a record deal with Nuclear Blast. Before they recorded their debut album, Sapp left the band to form Astaroth. They released their debut album Screams of Anguish in 1993 and went on a European tour with Hypocrisy in the beginning of 1994.

They released their debut album Screams of Anguish in 1993 and went on a European tour with Hypocrisy in the beginning of 1994. A second album was released in 1994, titled When the Sky Turns Black a second European tour followed in 1995, in support of Bolt Thrower[1]. After a third album In Mourning the band split up in 1997. In 2001, the band was revived with original member Larry Sapp and released a demo and started working on a new album. Larry Sapp died on 3 May 2004, causing the split-up of the band. Update: Larry Sapp did not pass away, he became a woman (according to Jeff Acres in a 2008 interview).

When The Sky Turns Black