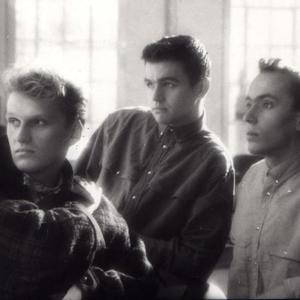 Originally founded by accident in 1983 by Holger+Wobker ( Kamerata , Beachhead ) and Peter Sawatzki ( Ultrabass ) in Hamburg, Germany. The original band name was Kapit?n Sehnsucht (Captain Desire). The band intended to write and play heartjerking and melancholic Electro Pop songs, sung in german. They were already well known in Germany for strange performances such as soundtracking nightclub sex shows on the well known ?Mile of sin?, Reeperbahn in Hamburg, which caused some problems for Holger, who was not yet 18.

And so it was strictly illegal, but well paid. Some producers showed interest. However, it was a difficult time - German New Wave had it's best days behind it, and singing in German had lost it's popularity. Despite this they went to the studio and produced some tracks with Joachim Witt, best known in Germany for individual and obstinate Pop. The results were unsatisfying, and the band remained unsigned. However, this was not the end of the story. Almost simultaneously to the production Witt did, they went to a studio in Hamburg and recorded a track in english. It was a spontaneous descision, largely for fun. Unpleasing results resulted in 3 separate recordings. These unplanned recordings again went largely unnoticed by the labels, with the exception of Mercury Records, who signed the band and released the material. The debut received some club notoreity but little chart interest. Boytronic finally received some publicity as a last minute replacement for Kim Wilde on Germany's equivalent of Top of the Pops. The performance was strange and a little embarassing for the band.

But the record was an instant hit. ?You? went top ten in Germany and many European countries. The First Album ?The Working Model? also did very well. So they decided to drop Kapit?n Sehnsucht and go on with this. But with success comes trouble. Boytronic is and always has been a idealistic band who wants to create something good and unique and didn't repeat themselves again and again. So this fact leaded to major problems with the record company. As they recognized that the band wouldnt turn into the expected moneymachine ? they tried to force Boytronic in a different direction. In this period the work on the second album began and Peter left Boytronic before it was finished.

Holger then teamed up with at that time, highly recomended Bobby Orlando. Holger liked the work Bobby O. did on the Pet Shop Boys and the simplicity that mostly comes to the point. So he went to New York and recorded some tracks. One of them ?Man in a uniform? later was released as a Single and did well in Skandinavia and Benelux. In 1985 The second Album ?The Continental? went to the shops and as you can hear, this is the result of confusion and disruption. A true document and very authentic album ? (by the way ? we've rereleased it as ?The Continental (replace)? in 2005 ? so you can make yor own judgement). Peter and Holger got together again for the Single. ?Late Night Satelite? and then Peter started work on his Ultrabass Project. He recorded two Albums. ?Trance Beats? and ?Planet Sys?. The last Boytronic single ?Hurts? was released as a teaser for the 3rd Album ?Godspell? in 1986. But unfortunately the Longplayer never saw the light of day. Some of the tracks where included in the ?Kamerata? Album ?Lovers and other Strangers?.

After a long lawsuit between the record company who claims the right to use the name Boytronic and Holger, who was really tired of all this, he decided to start a new project called Kamerata . His new Partner was Ralf Martens, with whom he did the ?Hurts? Single already. The Band released one Album and three Singles. Then split up. Strangely enough, the second major Hit Single for Boytronic came out at that time. ?Bryllyant?, originaly released as the flipside of the "You" 86 Remix, inspired some Belgian DJ to play it halfspeed. This version became a Clubmonster. Re-released as the slower Version, it went straight in the charts in Benelux and Great Britain and topped the Billboard Dance Charts. This also marks the end of the first Boytronic Period.

The second Boytronic band was casted by the record company and has in fact nothing to do with the original. But here we pay them some attention because life is strange and sometimes lines are crossing. The members where Hayo+Panarinfo , Bela Lagonda and Mark Wade as the Singer. They weren't anything but lazy and released two Albums ("Love for Sale", 1988 and " The Heart and the Machine" 1992). Also a bunch of singles beetween 1988 and 1995. They sounded different and suffered from the fact that they're a Fake Band. "Don't let me down", which sounded like Modern Talking in Italo Disco La La La and made it to he charts in Germany, but stucked at position 48. The last single of this Boytronic period was ?Blue Velvet? in 1995.

And then there was Silence ...
But behind the curtains ...

Holger and Peter Sawatzki started to work again on a new project called ?A Feather on the Breath of God?. They had just finished the recording of demos for a whole new album when Peter was diagnosed of cancer and passed away very rapidly. Holger decided to gave up singing and writing songs. He thought that this Band is cursed and went to a monastery in Thailand. He remains silent for one and a half year. When he came back to Germany, he didnt thought of doing music again. He was more interested in leading a normal life with a job and a partner...just like other people do. But after a while he started writing songs again and had the idea to relaunch Boytronic somehow.

And on the same day, he seriously tried to figure out how to manage, he recieved a call from Hayo Panarinfo. One of the members of the second Edition Boytronic Band. Hayo had exactly the same Idea. So they met up and started working on ?Autotunes? very soon. The record came out in May 2002 and brought Boytronic back to Life. With ?Autotunes? also came two different MCD-versions of ?Living without you? (the album version of the track was produced by Gareth Jones). In the meantime both of them where very busy...Holger compiled and re-released sucessfull the first album ? now called ?The Working Model Reverse? ? and works on a second project called ?Beachhead? with Hans Johm from Leipzig. They've released the first e.p. ?Drowning tonight? in September 2004. It contains 63 minutes of Music and the voices of both of them. '

Also on Boytronics own Label ?Triggertrax?, a Double CD called ?Maxi?, which is a Compilation of all 80's twelve Inches and a few new Tracks. Hayo left the band in 2005 by mutual agreement ? his label Major-Records demands more of his time and energy.

Holger decides to continue the work together with Hans Johm from Beachhead. He also involved Michael Maria Ziffels ? a multi-instrumentalist and composer from Berlin ? into the band. So they began to work on the new album "Dependence" immediately.
The trio lasted only for this album.

In 2009 Holger Wobker and Hayo Panarinfo joined forces again, and went to studio to record the new Boytronic album. The release is scheduled for autumn 2009.