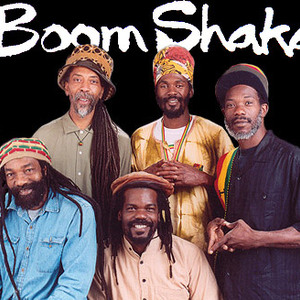 BOOM SHAKA's music ranks with the best of contemporary Roots Reggae Music. These musicians are true Reggae ambassadors, who have carr..ed the Rasta message worldw..de, from Ethiopia, to Europe, the US, Brazil, Morocco, and as far away as China. Their unusual musical talent is doubled with conscious lyrics that address contemporary and universal issues. This is a band which has earned international recognition with a set of hard top ranking alternative Reggae hits.

Founder and lead vocalist Trevy Felix is an initiated descendant of Africans from the Commonwealth of Dominica. After having been immersed in Roots culture and Reggae music from early youth, Trevy went to America and formed Boom Shaka in Los Angeles, gathering the best mixed talent to spread Roots Reggae music throughout the world.

The band members members are from the Commonwealth of Dominica, Jamaica, Antigua and the US.

While many Reggae artists have been hugely influenced by the legendary Bob Marley, Boom Shaka reigns supreme among the inheritors of Reggae 's number one prophetic and revolutionary figure, the African Ghetto King, PETER TOSH.

No other band can better illustrate the creative genius of Tosh's school of Reggae than Boom Shaka.

Like Peter Tosh, Boom Shaka are uncompromising when it comes to the essence of Reggae music's message, and its creative capacity. But unlike many Reggae artist who nowadays jump from one musical style to the other, Boom Shaka does not need any other new fad to replace the inherent creative possibilities found in Reggae music.

One never gets tired of listening to such consciously inspired, and beautiful music.

There is no doubt that Boom Shaka's inspiration draws from many classical Roots artists from Jamaica and the rest of the world; however, this band chose to, and eventually assured their place as the true successors of Peter Tosh.

The late Joe Higgs, who was the Wailer's musical director, saw Trevy, the lead singer of Boom Shaka, as the proof that Peter Tosh spirit and philosophy live on. Boom Shaka only took that spirit one step further, into the 21st Century.

With FERTiLE GROUND, their last album, recorded at the famous Radio Recorders Studio in Hollywood, Boom Shaka is set to move peoples hearts and feet everywhere with their long awated 5th CD.

The timing of FERTiLE GROUND" is so in sync with current events, that its recording happening before these events took place, makes the timing look divinely inspired.

Most Reggae experts and DJ's as well as the worldwide Reggae community agree that FERTiLE GROUND is a historical album, with at least 2 international Reggae anthems although, for true Reggae lovers, there are at least 5 long lasting hits in this historical CD. People in the year 2106 will still be bumping and meditating, spliff in hand, to these time defying tracks.

Rastafari is the Future, a spiritual meditation about JAH being the only possible future, is an unforgettable and irresistible Rasta chant about positiveness in these primitive and brutal times of Babylon. The other anthem," Ganja discrimination" is a rallying call for mankind's freedom, especially in the case of agriculture. Both songs are delivered in a deadly groove package whiile their uplifting lyrics contain hooks that will have listeners singing long after the music has finished.

The CRUC..AL combination of musicians is an integral element that gives BOOM SHAKA their edge. Each member brings with him a unique angle which throws a different spice into this Roots Reggae vodou music pot.

Boom Shaka's lead singer and main composer, Trevy Felix is, like Peter Tosh, a very dynamic band leader with strong, resonant, and compelling vocals. Trevy addresses pressing issues with a high sense of lyricism and vision. Throughout his songs Trevy's interests range from the preservation of African history and traditions, to the preservation of the environment, and the preservation of human dignity. But Trevy has also great love songs dedicated to women everywhere.

Jamaican underground roots legend drummer and composer Shakaman (from the famed Rastafarians) prov..des the band with an energetic, steady and edgy groove. Shakaman is one of the world's most gifted scientists in terms of rhythms and compositions. He is a highly respected sonic soldier of HiM. Haile Selassie. Shakaman is a hidden holy mystic man, but will deny it if you ask him. However, if you are a sincere beautiful woman in search of mystical knowledge, he may reveal himself to you.

'Bassy Ray' Felix, who is the brother of lead singer Trevy, is Boom Shaka's bass player. Being that bass sound is the most crucial element of Reggae, it is not a surprise that 'Bassy Ray', as he is known by his fans, has been crowned by Reggae bass lovers with the highest Bass Honors, calling him Top of the Bottom and Lowest of the Low. That means, in bass language, the Highest.

The vibrant bubbling tones of the creative magician Antiguan keyboardist Binghi- l fits the backbone of the rock solid bass, laid down by Bassie Ray Felix.

On songs such as Creation , World Affair, and on a Reggae translation of U2 's "Bloody Sunday ", lead guitarist Lester Fari appears to channel the ancient spirits of Roots Blues, a tradition which gave us the names of John Lee Hooker and Jimi Hendrix, to name but a few. With his searing guitar work, Lester brings the creative genius of afro american guitar playing with incredible rhythm and melody. Most Reggae guitar players based themselves on this magical afro american guitar style. Al Anderson, and Junior Marvin, who were Bob Marley's lead gu..tar..sts had a huge ..nfluence on Reggae gu..tar players, and were themselves from the USA. The old black american tradition known as Blues, is what Jimi Hendrix and the creators of Jazz were playing. Lester is one of the masters of this art, and gives a unique Reggae flavor to it.

Rootsman is a creative and revolutionary DJ of the highest Bobo Rasta Order, a ghetto poet which could be ranked with internatiional artists such as Sizzla and Anthony B. Rootsman's rythmic rhymes and melodies bring the already hot miix of Boom Shaka's music to the boil.

Boom Shaka possess a natural aura and charisma that enhance their ability to connect with the people's issues and hearts, and which induces a frenzied audience response everywhere they play.

In my thinking, ROOTS MUSiC has the ability to make you change.., says lead singer TREVY , ..create a revolution inside you until you change for the better, whether you want it now or not, because it is a music that affects and heals your soul directly- from Jah to you, with no intermediary ...This is not new information..... and I and I have known that in Africa since the begining of history : if a man don't listen to ROOTS MUSiC, he is a lost man..."

Keep your eyes and ears on their progress, as BOOM SHAKA is a sure, one way, first class ticket into the 22nd century and beyond.