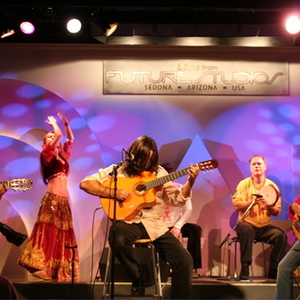 The veteran Los Angeles-based songwriter/musicians collectively known as INCENDIO knew the kind of inspired passion and energy they wanted to convey when they named their band in 1999. The Latin guitar world fusion created by guitarists JIM STUBBLEFIELD, JEAN-PIERRE DURAND, and LIZA CARBE' has received international acclaim, and their reputation as a live act has spread. The band creates a polyrhythmic swirl of multiple Latin American music forms (boleros, cumbias, salsa, tango, mambo and the indigenous Peruvian valses criollos) and combines them with Indian, Arabic and Celtic flavors.

Then they add just the right touch of jazz improvisation and dynamics, and the sizzling result is what one Incendio fan calls edge of your seat music. On the strength of six popular releases, 2000s MISTERIOSO, 2002s ILLUMINATION, 2003s live-in-the-studio INTIMO, New World Music's INCENDIO (2003), Incendio Music's DIA Y NOCHE (2005), and their latest CD - SEDUCTION (2006), the very-much-in-demand INCENDIO has built a core fan base (many of whom follow the band from city to city, club to club, festival to festival) and a yearly touring schedule that averages 150 shows a year.