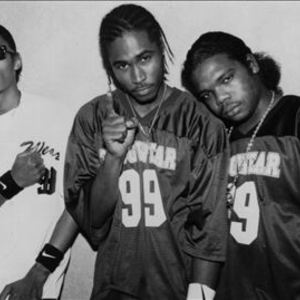 Bone Thugs-N-Harmony is a U.S. rap group formed in Cleveland, Ohio, United States in 1991. It consists of rappers Krayzie Bone, Wish Bone, Flesh-N-Bone, Layzie Bone, and Bizzy Bone. Perhaps the group's most important contribution to rap is their speedy, harmonizing flow. While fast rapping has always had a niche in the culture, Bone certainly brought the style to the forefront. In addition, the group's ability to harmonize whilst flowing at top speeds is truly remarkable. Not before nor since has a rapper or rap group sung an a cappella tune without loss of street cred.

Perhaps the group's most important contribution to rap is their speedy, harmonizing flow. While fast rapping has always had a niche in the culture, Bone certainly brought the style to the forefront. In addition, the group's ability to harmonize whilst flowing at top speeds is truly remarkable. Not before nor since has a rapper or rap group sung an a cappella tune without loss of street cred.

Their albums have varied in subject material, with 1994's Creepin on Ah Come Up being heavily influenced by the G-Funk gangsta rap era. E. 1999 Eternal, the group's most successful album, focused primarily on violent criminal activity, but also showed Bone exploring themes of spirituality, and the introduction of the group's trademark ?weed songs?? songs devoted entirely to smoking weed. The group's 1997 album, the Art of War, saw Bone further explore a wide variety of subjects and styles, with even more focus on God and family and an overall more ambient, mellow sound. The group still found time for violent lyrics, though, with a large portion of the album dedicated to what they labeled ?clones? who claimed Bone had stolen their quick-tongued rapping style and vice-versa. 2002's Thug World Order album saw a drastic change in subject matter and tone for the group. The lyrics were almost completely void of any violence.

Although 1996 was definitely the peak of their popular appeal, Bone still has a fairly large cult following. Bone Thugs-N-Harmony are the only rap artists ever to have collaborated with late rappers Eazy-E, 2Pac, Big Punisher and The Notorious B.I.G.. Their latest release, Thug Stories, was released September 19, 2006.

Bone Thugs released their new album Strength and Loyalty on May 8, 2007 with production by Swizz Beatz, Kanye West, Lil' Jon, Three 6 Mafia, Big Boi of OutKast, Play-N-Skillz, Jermaine Dupri, Timbaland and Dr. Dre. It will be featuring guest appearances by Jennifer Lopez, Kelly Rowland, The Game, Lil Eazy-E ,Mariah Carey, Akon, Chamillionaire, Twista, Busta Rhymes, Stevie Wonder, Eve, Cassidy, Lil' Recka and DMX. According to the group they have recorded nearly 70 tracks and are in the process of deciding which tracks will appear on the album. Although producer DJ-Uneek helped to launch the band to stardom, he does not appear on the album; rather, handling the majority of the producton is Chicago native LT Hutton, with whom the band has worked on prior recordings. According to Bone, the album will feature all-new vocals from imprisoned member Flesh-N-Bone.

The first single, ?Just Vibe?, has been released on the radio in Southern California. Bizzy Bone will not be on the album. Bone says that this album will be their best ever. Swizz Beatz will handle most of the production, as the group signed in 2005 to Swizz Beatz' Full Surface Records, and in 2006 to Interscope Records.

As of 2006 to the present, Bone Thugs-N-Harmony, especially Krayzie Bone, have continued their strong track record of collaborations and appearances on compilation albums. Krayzie appeare d on Duets: The Final Chapter by The Notorious B.I.G, the soundtrack from the Antonio Banderas movie Take the Lead and on DJ Khaled's new album Listennn? The Album (all of these appearances were credited as Bone Thugs-N-Harmony on the track listings to show the loyalty of the group). Bone Thugs appeared with Lil Eazy-E on the soundtrack to The Game's debut acting movie Waist Deep, and on The Source Presents Fat Tape Vol. 1. The most successful was Krayzie Bone's appearance on Chamillionaire's #1 single Ridin'. Krayzie Bone is featured on the new 2Pac album Pac's Life on the song ?Untouchable (Swizz Beatz Remix),? credited as Bone Thugs-N-Harmony.

Still Creepin On Ah Come Up