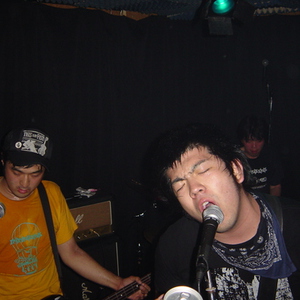 There are two groups with the name Blotto: 1) Blotto is a punk band from Tokyo, Japan that is currently active. 2) Blotto was a band from Albany, New York active during the 1980's. Blotto (Tokyo, Japan) 1) Blotto are from Tokyo/Yokohama, Japan. Blotto began in 2001 after meeting at a punk show and started playing shows in summer 2002. They planned a show called "Lame Gig Contest" and a lot of good bands played it. Like Fifth Wheel, Sprech Chor, Raise Mind, I Excuse, The Tim Version, Out Of Style, One Leaf, Unching Style, Life Indicator, Four Tomorrow, Baby Little Tablets, The Scruff.

1) Blotto is a punk band from Tokyo, Japan that is currently active.

1) Blotto are from Tokyo/Yokohama, Japan. Blotto began in 2001 after meeting at a punk show and started playing shows in summer 2002. They planned a show called "Lame Gig Contest" and a lot of good bands played it. Like Fifth Wheel, Sprech Chor, Raise Mind, I Excuse, The Tim Version, Out Of Style, One Leaf, Unching Style, Life Indicator, Four Tomorrow, Baby Little Tablets, The Scruff........and more. Blotto is always the lowest grade in the contest. So far they've released two CD's on Yokohama's Anti-New Waves records and a 7" on Snuffy Smile. They like The Clash, Stiff Little Fingers, Crimpshrine, Fifteen, Dillinger Four, Beer, Whiskey and soda, Sake, Sho-chu.

2) Blotto (Albany, New York)
For all the bands that were formed and performed and re-formed and deformed throughout the Capital District, very few ever made any sort of splash into the national pop music scene. There were the exceptions: Betty George's version of "Sentimental Journey" is considered the definitive interpretation; Jay Traynor was the original namesake in "Jay and the Americans" (recording the Top 10 hit "She Cried"). The Knickerbockers ("Lies") practiced through Albany before making it big.

On the other end of the spectrum were the bands that shoulda- coulda- woulda- but didn't. There are still memories of the local scene - 288 Lark and JB Scott's and Puttin' On The Ritz and the Falcon's Nest - and groups like the Stomplistics, Mambo-X, Chefs of the Future, the Verge, the Penny Knight Band, French Letter, the Units, Fear of Strangers, you can continue the list if you want.

Between those extremes came a band that almost made it big. Their songs were played on the radio, at a time when radio stations wouldn't play local bands. Their music skewered musical genres from heavy metal to surf tunes to "teen death rock" anthems. And everything - from their song titles to their album covers to their personal appearances - were done with the tongue firmly jammed in the cheek.

Welcome to the wonderful world of Blotto.

Blotto actually began as the Star Spangled Washboard Band, a bluegrass combo with plenty of country corn. With their live show, " Radar Beans " and tracks like "I Get a Charge Out of You" and the medley "The Battle of New Orleans / Does Your Chewing Gum Lose Its Flavor," the Washboard Band received enough acclaim to appear twice on the televised Mike Douglas Show. Then the group folded.

Four alumni from the Washboard Band continued their musical careers by performing monthly at the Saratoga club "17 Maple Avenue". They later added a bass player, a drummer and a female vocalist, and renamed their band Blotto, after the dog in the 1930's novel "Nightlife of the Gods."

To create an instant mystique about the band - and as an homage to the Ramones - the band members took the name "Blotto" as their surnames, making them sextuplets of different mothers. So during the late 1970's, that group performing at JB Scott's or the Ritz or the Chateau or 288 Lark was actually vocalist Sarge Blotto, bassist Cheese Blotto, guitarist Broadway Blotto, guitar-vocalist Bowtie Blotto, and drummer Lee Harvey Blotto. Female lead singer Blanche Blotto joined the band for a while, then quit, being replaced by Chevrolet Blotto.. They spent two years honing their chops on Albany's live music circuit, then raised enough money to produce their own four-song album.

In 1980, Blotto released their first EP, with the greeting-card title "Hello! My Name Is Blotto! What's Yours?" Included on that mix was a remake of the Supremes classic "Stop In The Name Of Love," a jab at lounge lizard groups in the Broadway-Blanche duet " We Are The Nowtones " and a cautionary tale of choosing the wrong manager in "Bud ... Is After Us." And if you took the time to read the liner notes - a single-spaced typewritten biography on the front of the EP - you found out more about this new band. The notes told of their humble beginnings at the "Blotto Grotto" (the 17 Maple Ave. club), their love for 60's and 70's party tunes, how New York Rocker magazine once selected their poster as "Poster of the Month" (issue 22, Sep. 1977), their "pajama parties" (patrons were encouraged to wear their Dr. Denton's), the "Miss Blotto" pageant, and the Halloween Hop concert (which later became the annual "Blottoween" show).

But it was the first song on Side A - "I Wanna Be A Lifeguard" - that got the most attention. The song was a beach party fantasy - a shoe salesman who dreams of a sunshine job, where the only employment requirements are staring at the bathing beauties and wiping zinc oxide on his nose. At a time when local bands couldn't get their music on the radio, local stations began playing the song - first WQBK, then Top 40 stations like WFLY and 3WD.

According to Broadway, "Blotto got airplay because we hired Joel Webber(at the suggestion of WNEW FM), Radio Promo Man Extraordinaire. He was 6' 7" and a riot."

"From there things went into high gear and stayed that way for three years," said Lee Harvey Blotto in an interview with the Albany Times-Union. "We all quit our jobs and began playing all over."

"All over" meant outside the Capital District. They played in Long Island, where they were greeted as superstars by SUNY-Albany students who lived in Nassau and Suffolk counties. They played in Massacusetts and Ohio and Ontario and anyplace else, promoting their hit song.

Blotto even had something most other bands didn't at the time - a music video, thanks to the efforts of two SUNY students who filmed the band for a senior project. "I Wanna Be A Lifeguard" was among the videos aired on MTV's first broadcast day, and remained in heavy rotation for months.

The group followed up the success of their debut EP with another EP, "Across and Down." Complete with an actual crossword puzzle on the front cover, Blotto continued the formula of novelty hits and party songs. Two more radio hits emerged from this EP - "She's Got A Big Boyfriend," a cautionary tale about dating somebody else's girl; and "My Baby's The Star Of A Driver's Ed Movie," a winking-eye entry into the "teen death" musical genre.

By 1982, Blotto was riding high. They were the opening act for Blue ?yster Cult's North American tour, and noted producer Bob Clearmountain turned the dials for their next single, the drive-in makeout tune "When The Second Feature Starts." Stories and articles about the band appeared in national magazines like Rolling Stone, Trouser Press?and Penthouse.

The next year, Blotto released their first full-length album, "Combo Akimbo." The nine songs on this album spoofed spy movies ("Goodbye, Mr. Bond"), gold-diggers ("It's Only Money"), family members that interfere on dates ("It's Not You"), and groupies ("Occupational Hazard"), among other tracks. Blue ?yster Cult lead guitarist Buck Dharma produced and played guitar on "Metal Head," a heavy metal spoof with three false endings and goofy lyrics:

Thanks to the success of "Metal Head" and the accompanying video (which featured Sarge Blotto chomping the head off an E.T. doll), "Combo Akimbo" hit #1 on college radio stations throughout the Northeast. A compilation of the best of three previous Blotto albums was released in Canada under the name "Hello, My Name Is Blotto, What's Yours?" It sold respectably, and a single from that album, "I Quit" b/w "It's Not You," received airplay on some Canadian stations. Blotto also found a home on the Dr. Demento radio show, where songs like "Metal Head," "I Wanna Be A Lifeguard" and "My Baby's The Star of a Driver's Ed Movie" often appeared on Dr. Demento's "Funny Five Countdown."

But no matter how hard they tried, they couldn't sign on with a major label. Attempts to sign with Atlantic Records fell through. Another record company, Boardwalk Records, almost signed the band - but folded before the contracts could be drawn up. Even "Combo Akimbo," their first full-length album, was still on their homemade Blotto Records, and the only distributor they could find to get their records in national stores was Peter Pan Records, an outfit better known for children's discs and "jazzercize" albums. Even their new manager, former television actor Burt Ward, couldn't get them past the independent label glass ceiling.

In 1984, the party was over. Blotto called it quits, and the members pursued their own separate careers. Lee Harvey Blotto became an environmental attorney. Sarge Blotto became a Times Union columnist. Blanche Blotto became a teacher, Bowtie Blotto worked with computers, and the rest of the band drifted to the four winds.

There were reunions - in 1987, as the opening act for World Party at the Palace Theater, Blotto stole the show. They headlined a triumphant 1992 concert at Proctor's Theatre, and later hosted annual October "BLOTTOWEEN" shows at RPI. Fifteen years after their release of their first EP and hit track, Blotto was honored by Mayor Jerry Jennings, who proclaimed August 15, 1994 as "Blotto Day" in the City of Albany. In 1995, Blotto was among the first inductees in the Capital Area Musicians Association Hall of Fame.

1982 - Hello, My Name Is Blotto! What's Yours? (Attic)
(Released in Canada, compilation of nine songs from previous Blotto releases. Includes a re-recorded, faster version of "I Wanna Be A Lifeguard")

1987 - I Wanna Be A Lifeguard (Performance)
(compilation of previous Blotto releases; contains a soundsheet with "Funky Lifeguard" on it)

1994 - Collected Works (One Way)
(contains entire first three albums, with the exception of "Bud Is After Us" - also contains three versions of "I Wanna Be A Lifeguard" - original, live in Poughkeepsie [also known as "Funky Lifeguard"] and karaoke)


Also, there's currently a Japanese punk band called Blotto, active since around 2002 around the Tokyo area. Their music has drawn comparisons to bands like [band]Crimpshrine[/band], [band]Leatherface[/band], [band]Jawbreaker[/band], and [band]H?sker D?[/band], among others. They played a short tour in the U.S. during the summer of 2006, and have released split 7" singles on the Snuffy Smiles label with U.S. bands [band]Altaira[/band], [band]Modern Machines[/band], [band]Off With Their Heads[/band], and [band]Drunken Boat[/band]. They have also appeared on tribute compilations to [band]The Replacements[/band] and [band]J Church[/band].

Then More Than Ever