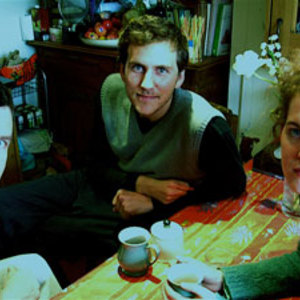 Blink is 1. an alias for Jukka Hautam&auml;ki & A.P. Lehtola 2. The name of a San Diego punk rock band formed in 1992. They changed their name to blink-182 in 1994. 3. a collaboration between 2 psytrance producers, namely Irad Brant AKA Switch and Shay Elmakaies AKA Dynamic. 4. A pop/rock band from Dublin, Ireland. 5. A Jazz band from London, UK formed in 2004. 6. A girl band from Indonesia The text below applies to [4] the band from Dublin, Ireland.

1. an alias for Jukka Hautam&auml;ki & A.P. Lehtola
2. The name of a San Diego punk rock band formed in 1992. They changed their name to blink-182 in 1994.
3. a collaboration between 2 psytrance producers, namely Irad Brant AKA Switch and Shay Elmakaies AKA Dynamic.
4. A pop/rock band from Dublin, Ireland.
5. A Jazz band from London, UK formed in 2004.
6. A girl band from Indonesia

The text below applies to [4] the band from Dublin, Ireland.

The band Blink-182 originally called themselves Blink but changed their name after a threat of legal action - a fact they were demonstrably unhappy about at the time, referring to the original Blink as a 'shitty Dublin pop band'

Formed in the mid 1990s by Dermot Lambert, Robbie Sexton, Brian McLoughlin and Barry Campbell, Blink's inclusion on a CD for a trade festival in New York sparked a review, leading to an A&R storm as international music executives chased the dreams and dollars of 'the next U2', which ended with the band signing with EMI for their debut release.

Blinks' first singles "Going To Nepal" and "Happy Day" went top 20 in Ireland. Their third release "It's Not My Fault" debuted at No 8.

August 1994 saw the release of their debut album A Map Of The Universe By Blink, entering the Irish album charts at No. 8 and referred to by Hot Press as "the best Irish pop album ever made", an accolade as opposed to a slur in the days before pop became a dirty word.

Blink released the single "Cello" to support the album release and it hit the No. 10 spot and held its position for six weeks. The album went Gold almost immediately. 1995 was a very good year indeed. Soundcrowd Orchestra remixed Cello and it became a massive hit all over again. Blink were nominated for four awards at the Hot Press Music Awards.

Sticking around Boston and New York and playing every music venue they could find, alternative US radio took to Blink, and suddenly "It's Not My Fault" was being A-listed on radio stations across the Northeast and spreading like wildfire across college radio. In late 1995, Blink set up their own New York-based label, released A Map Of The Universe By Blink and went on to sell more than 80,000 copies of it in the US by that Christmas.

At home, the record company were looking for a new album, so the band hesitantly packed their bags and headed back to start recording for Parlophone UK. However, the call of the US kept coming hard and strong - offers of shows, supports with bands they had met over there, so album number two was postponed in favour of a return trip to the States.

The decision to try and break the States was a solid one and a year later, the band signed on the dotted line with Paradigm Records, Blink began recording their second album The End Is High, releasing it in the US in March 1998.

Billboard magazine decided it was their five star album of the month, and the album went on to do 90,000 copies in a very short space of time, opening the doors for bigger US tour supports. 1999 onwards saw Blink opening shows, sharing dressing rooms with The Ramones, Mercury Rev, Moby, Lloyd Cole, The Cardigans, Mark Geary, Brendan O'Shea and blink-182.

Then Paradigm Records closed, and Blink and their good friend, renowned producer and Ministry founder, Howie Beno (Red Hot Chili Peppers, Blondie) agreed to go ahead regardless, with plans for the third album. And so Deep Inside The Sound Of Sadness, the brand new album, was born.

Individual members of the band have been active in the music scene in Dublin in recent years, but the band itself is inactive, with no gigs or new music planned.

The text below applies to [5] the band from London, UK.
Formed in 2004 out of a collaboration between pianist Alcyona and French saxophonist/clarinettist Robin Fincker, Blink has been playing since 2006 with drummer/percussionist Paul Clarvis. .. A member of London's Loop Collective, the trio plays mostly original material by Alcyona and Robin. They recorded their debut album in the prestigious Abbey Rd studios, available now on Loop records. Interested in all kinds of new encounters Blink have performed with French saxophonists Guillaume Orti and Stephane Payen, poet Paul Hyland, string quartet Solid Strings and for a Len Lye silent film.

a map of the universe

the end is high

deep inside the sound of sadness