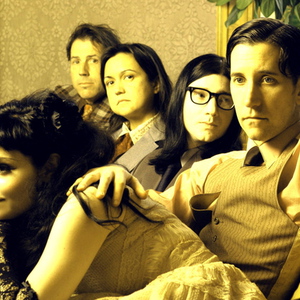 Blanche is an American alternative country band from Detroit, Michigan. Their music is based in Americana, early country and folk blues with a touch of haunting Southern Gothic stylings and garage rock mentality. Blanche is known for wearing vintage fashion of the early- to mid-20th Century. The origins of Blanche can be traced back to the early '90s band Goober & The Peas. Led by Dan "Goober" Miller, the band was devoted to cowpunk, and dressed in honky tonk attire. After the break-up of Goober & The Peas, Miller next formed 2 Star Tabernacle.

The origins of Blanche can be traced back to the early '90s band Goober & The Peas. Led by Dan "Goober" Miller, the band was devoted to cowpunk, and dressed in honky tonk attire. After the break-up of Goober & The Peas, Miller next formed 2 Star Tabernacle. Miller co-led that band with Jack White (who had previously been a drummer for Goober & The Peas). After issuing one 45 rpm record with Andre Williams, the band split. White focused on his other project, The White Stripes, and Miller formed Blanche with his wife and 2 Star Tabernacle bassist, Tracee Mae Miller in 2002. According to Dan Miller, Blanche was formed after he, Tracee Mae, Feeny, Patch Boyle and Jaybird committed to learning new instruments and to play a variation on American roots music.

The first Blanche release came in 2003 in the form of a 6-song CD titled "Demo EP". The featured tracks are "Intro", "Do You Trust Me?", "Garbage Picker", "Another Lost Summer", "Superstition", "Someday", "So Long Cruel World" and an "Outro". The CD also features a video of "Do You Trust Me?" directed by Kevin Carrico.

This recording was soon followed by an EP released in 2004 titled America's Newest Hitmakers, on Loose Records, and the demo "Never Again", which appeared on the 14th compilation CD for the publication Comes With A Smile. The band's first full length album, If We Can't Trust the Doctors, was initially released on Cass Records that same year, but was picked up for wider release by V2 Records soon after. The initial line-up also released a single on Cass Records with "Who's To Say" on the A-Side and "Superstition" on the B-side. The single was released on green and black vinyl. Blanche's official releases in Europe have been on the Loose music record label.

Blanche released an EP on V2, What This Town Needs, featuring five tracks and a video, on October 24, 2006 in the U.S. It was released in Europe on Loose on December 4, 2006. The EP title track appeared on a V2 records sampler CD in September 2006. A second full-length album, Little Amber Bottles, was to be released in early 2007 but the demise of V2 Records as a current label put the US release date into question. On June 18, 2007, "Little Amber Bottles" was released in the UK and demonstrated a more mature sound for the group. All of the band members save Jaybird Jannon penned songs for "Little Amber Bottles." Two music videos, released in July, were for the songs "What This Town Needs" and "No Matter Where You Go."

Lawrence replaced Patch Boyle who appeared with the rest of the band on their debut recordings.

If We Can't Trust the Doctors