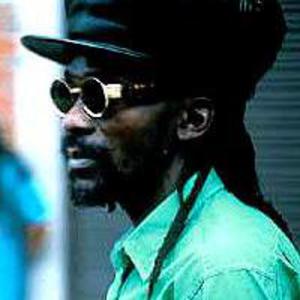 Born in Westmoreland, Jamaica on 2nd February 1950 the singer who became known as Bim Sherman had many aliases - Jarrett Tomlinson, Jarrett Vincent, Lloyd Vincent, Bim Shieman, Lloyd Tomlinson, J.L. Vincent etc. The names Vincent and Tomlinson came from Lloyd's mother and father respectively. Jamaican singers of the sixties and seventies found it a commercial necessity to change names as they moved from label to label, just like the North America's rural bluesmen of an earlier age changed names as they moved from town to town.

Bim Sherman did not ascribe his love of music to any one person but rather to his family, with whom he would attend church services and Sunday school. But as he became older, he would go to the local dancehall:

"... I always knew I could make the music, ever since I was small and it was all I wanted to do. I remember growing up and listening to it, singing along with it and feeling the power of it, which is the other side of roots, and feeling light-headed..."

In the early seventies the young Sherman swapped trades from fisherman to electrician when he moved in with one of his brothers in central Kingston. His closest musical friends were Keith Porter and Ronnie Davis, who would go on to form premier vocal group the Itals, but his first recording experience was with his early mentor Gladstone 'Gladdy' Anderson at the famous Treasure Isle studios. But things did not work out as well as he hoped, or as he once so eloquently put it...

So his first record to be released was cut at the Federal studio with Sid Bucknor who was the engineer for '100 Years'. 'Love Forever' followed, a self-financed affair on the Element label and then came a string of tunes now recognised as reggae roots classics on Sherman's own Scorpio, Red Sea and Sun Dew imprints. These singles met with a degree of local success and appreciation which convinced him to continue, but in Jamaica there was always a kind of pressure:

"Lots of people like Randy's or Joe Gibbs want to record me, and even producers before them like Coxsone. But its not easy in JA (Jamaica) to get what you want out of recording and those people have a range of tricks they use to oppress you..."

Like so many other young Jamaicans in the seventies Sherman decided to try his luck in the UK, after being persuaded to join 1979's Roots Encounter tour alongside renowned toaster Prince Far I, Creation Rebel and Prince Hammer. In fact his first album 'Love Forever' had been issued a year earlier on the Tribesman label, including the title tune plus nine other previous Jamaican singles. Sherman settled in the UK cementing a friendship and business relationship with the young maverick reggae producer Adrian Sherwood, a long-time admirer of the singer.

It was during this time that Sherwood was developing his business collaboration with the heavyweight Jamaican DJ Prince Far I and he encouraged Far I to hook up with Sherman for recording purposes. Eventually tunes such as 'Down In Jamdown' (HIT DD 12) with Jah Lion and 'Love Jah Only' (HIT DD II) with Jah Buzz came into the UK on the Hitrun label, a partnership venture between the young English producer and the veteran Jamaican toaster.

The connection with Sherwood's subsequent On-U Sound label led to collaborations with a vast range of musicians, artists and producers including Gary Clail, with whom he appeared on Top Of The Pops crooning on his 'Human Nature' smash hit of 1991, Akabu, Tackhead, Japan's Audio Active, the Sabres Of Paradise, Groove Corporation, Bomb The Bass and latterly Sin?ad O'Connor. These collaborations continued along side Bim's own solo releases, mainly through his UK imprint Century.

In 1994 Sherman re-recorded six of his old tunes in an acoustic session at Richard Branson's Manor Studios, accompanied by Skip McDonald on guitar and Talvin Singh on tablas. A trip to Bombay followed where India's finest film musicians provided the extra layers of sound that resulted in 1994's 'Miracle' (ON-U LP67), the album which is probably Sherman's masterpiece and a fitting testament to reggae's sweetest voice.

What marked Bim Sherman out from his contemporaries was not just his plaintively sweet vocal delivery, or the matching subtlety of his songwriting, but the fact that throughout his career he maintained a fierce defence of his own independence as an artist, keeping control of his output both creatively and commercially.

The Need To Live

It Must Be A Dream